Keith Humphreys wants to know what’s up with tennis and all the different surfaces it’s played on:

Think how shocked we would be if a professional basketball team announced that they were changing the surface of their floor from wood to cement and were also going to raise their rim by six inches. We expect consistency in the conditions of basketball, ice hockey and bowling, but not tennis.

Is there a sport that allows as much variation in the game under the same name? The only one I could think of is baseball, in which a stadium can have artificial turf versus grass and the outfield fences can be arranged in a variety of ways.

Are there other examples of sports that are really multiple, different versions of a game? And are any of them as variable as is tennis?

I wouldn’t put baseball (or football or soccer or cricket) in the same league. Changes from grass to artificial turf, along with the modest differences in the size of the playing field, don’t make nearly as much difference as tennis surfaces. Clay and grass are practically different games in the tennis world.

In theory, a sport like golf or bicycle racing might qualify, since the field of play is wildly different from week to week. In practice, though, it doesn’t really seem to make that much difference. Some golf courses favor long 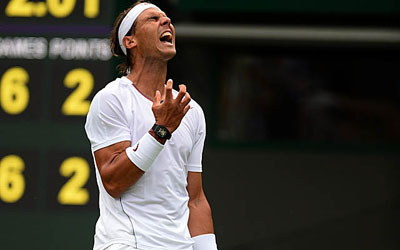 hitters, just as some bicycle races favor climbers, but the results seem to be much less systematic than tennis.

However, I think the surface difference in tennis is starting to decline. In the 90s, when serve-and-volley players still roamed the earth, Wimbledon and the French Open really were like two different sports. One set of folks won on grass, the other set won on clay. Pete Sampras, the best player of his era and one of the best of all time, never even made the finals of the French and only got to the semis once. Conversely, Gustavo Kuerten, who won the French three times, only made it past the third round of Wimbledon once.

But as playing styles converge, this is becoming less of an issue. Before long, it’s likely that virtually everyone on the tour will be playing the same basic power game: big looping forehand and killer two-handed backhand, with everyone pinned behind the baseline about 90 percent of the time. When everyone plays the same game, they’re all at the same advantage (or disadvantage) on all surfaces. That’s why Roger Federer routinely gets to the finals of the French and even won once (a year when Rafael Nadal lost early) and why Nadal has done the same at Wimbledon. Surface is less of a factor than it used to be, and this trend will almost certainly continue.

Which, in a way, makes the argument for standardizing surfaces stronger than ever. It’ll never happen—not soon, anyway—but the sport would probably be better off if grass and clay disappeared and tournaments all moved to a moderately fast artificial surface of the type used at the U.S. and Australian Opens. Those are always my favorite tournaments, because anyone can win and they don’t disqualify a big chunk of the field right from the get-go.

As near as I can tell, I’m one of the few who loved watching serve-and-volley tennis on grass, especially when there was a contrast of playing styles (Borg-McEnroe, Becker-Lendl, Sampras-Agassi). But that’s pretty much gone the way of the dodo, and with it the reason for playing on grass at all. But it was nice while it lasted.

(And why am I writing about this? I guess I’m just trying to take my mind off the Supreme Court’s Voting Rights Act decision. Even though I expected it, I’m feeling pretty morose about the whole thing.)