This is from the Washington Post today in a story about congressional efforts to write a tax reform bill:

Aides in both parties acknowledged that a tax bill cannot pass unless President Obama and congressional Republicans resolve their long-standing dispute over the national debt. Obama wants a tax overhaul to generate additional revenue to rein 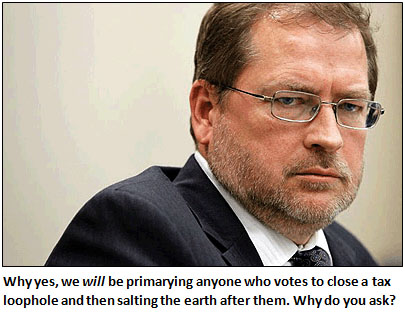 in borrowing; Republicans say they will agree to fresh revenue only if Democrats agree to restrain spending on expensive health and retirement benefits.

Wait. What? Did I miss something? Which Republicans have said they’d agree to new revenue if Democrats rein in entitlement spending? I can think of two or three who have kinda sorta said this was a possibility, but it’s the same two or three who have been saying this for a long time. For the party as a whole, this is still a complete nonstarter. No new revenues, no how, no way.

Right? Does anyone know where this came from?

Anyway, moving on, the gist of the story is something we started to hear about a few days ago: Max Baucus’s plan to do tax reform starting with a “blank slate.” That is, wipe out every tax credit, deduction, subsidy, or tax expenditure, and only include it in the final bill if someone can affirmatively justify it:

The Senate’s chief tax writers plan to scrap the entire code and start from scratch in their push for tax reform, and on Thursday they gave lawmakers a month to make a case for preserving some of the $1.3 trillion in breaks on the books.

….“We plan to operate from an assumption that all special provisions are out unless there is clear evidence that they: (1) help grow the economy, (2) make the tax code fairer, or (3) effectively promote other important policy objectives.”

I guess this sounds bold and innovative—it got top billing from the Post, anyway—but color me unimpressed. It’s possible that this approach will end up eliminating some of the hundreds of small tax loopholes out there, but the top twenty account for something like 80 or 90 percent of the revenue, and no one will have the slightest trouble justifying those. What really matters isn’t forcing a few lobbyists to write term papers, it’s whether Congress has the political will to stand up to them. So far, I’ve seen zero evidence of that.

Nor have I seen any evidence that the Republican Party will accede to any significant new revenues—and by this I mean actual revenue, not sham revenue based on dynamic scoring fairy tales. Hope springs eternal, I suppose, but the stars sure don’t seem aligned for any real progress on this issue. Is there anyone out there who wants to try to persuade me I’m wrong?