As near as I can remember, I’ve been reading about our unsustainable shortage of primary care physicians since—oh, since about when I learned to read. And I always sort of vaguely wondered why the law of supply and demand seemed to have broken down here. If GPs are in short supply and specialists are a glut on the market, then salaries should go up for GPs and down for specialists. Eventually the market will get to the right equilibrium. Right?

But that hasn’t happened. And not for lack of time. According to Phil Longman, in a new piece for the Washington Monthly, the problem of overspecialization has been recognized since the early 1960s, which means that my joke about it being around since I learned to read is just about accurate. (Except for the part about the five-year-old Kevin Drum actually reading about it.) So what’s up? Why are specialists still paid so much if there are too many of them?

Longman says there are two problems. First, Medicare sets reimbursement rates, and thanks to the stranglehold that specialists have on the process via an advisory panel called RUC, those rates have stayed high regardless of market forces. But that’s only been the case since 1991, and the problem goes back further than that. So again, what’s up?

That brings us to Longman’s second problem: America’s residency programs reserve lots of slots for specialists and not very many for GPs. So regardless of market forces, we get more specialists than we need or want and not enough GPs. But the underlying problem remains Medicare, which subsidizes residency programs, and the stranglehold that specialists have on its residency funding program:

As an indication of just how perennial this behind-the-scenes struggle has been, in 1980 a federal advisory panel on graduate medical education was already criticizing the system for pumping out an excess supply of specialists. By 1985, none other than then Senator Dan Quayle was penning an article for the policy journal Health Affairs calling for Medicare to stop subsidizing residency programs that didn’t send at least 70 percent of their graduates into primary care. By 1989, the Institute of Medicine was weighing in, saying that graduate medical education programs were too concentrated in hospitals and were failing to provide proper training for primary care physicians. Yet despite the alliance of conservatives alarmed by the mounting cost of Medicare and reformers intent on improving the practice of American medicine, nothing changed, thanks 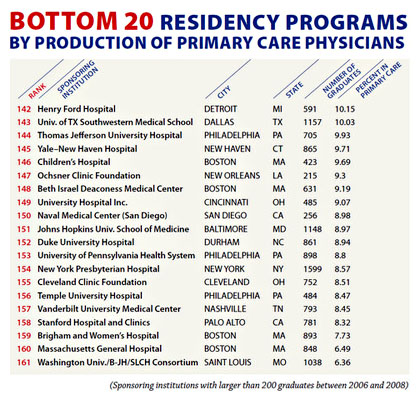 to the entrenched powers of specialists within both academic medicine and the health care system generally.

I’ll confess that I’m still a little baffled. If I were, say, a radiologist, the last thing I’d want is an army of young radiology specialists flooding the market every year. Sure, it’s nice that my fellow radiologists on the RUC will try to keep my payments high no matter what, but wouldn’t it be better to rely on supply and demand? That seems more reliable than a finger in the dike that could get pulled out if Congress ever gets a bee in its bonnet. And restricting supply is hardly a novel idea. It’s pretty much how every other occupational licensing body in the world works.

So I continue to be a little puzzled about this. Still, the whole piece is worth a read for a look into how regulatory capture works and what it might take to fix things. And for your further amusement, the table on the right is Longman’s Hall of Shame: the 20 worst teaching programs in the country in terms of producing primary care physicians. Go boo them the next chance you get.