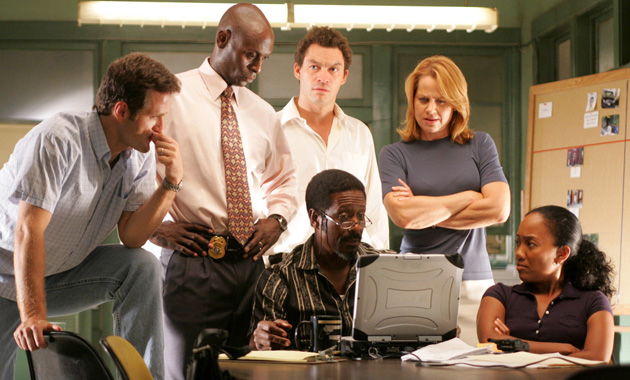 David Simon, creator of The Wire, got a lot of attention over the weekend for his defense of the NSA program that collects records of every phone call made in the United States. It’s really nothing new, he says:

Allow for a comparable example, dating to the early 1980s in a place called Baltimore, Maryland.

There, city detectives once began to suspect that major traffickers were using a combination of public pay phones and digital pagers to communicate their business. And they took their suspicions to a judge and obtained court orders — not to monitor any particular suspect, but to instead cull the dialed numbers from the thousands and thousands of calls made to and from certain city pay phones.

Think about it. There is certainly a public expectation of privacy when you pick up a pay phone on the streets of Baltimore, is there not? And certainly, the detectives knew that many, many Baltimoreans were using those pay phones for legitimate telephonic communication. Yet, a city judge had no problem allowing them to place dialed-number recorders on as many pay phones as they felt the need to monitor, knowing that every single number dialed to or from those phones would be captured. So

authorized, detectives gleaned the numbers of digital pagers and they began monitoring the incoming digitized numbers on those pagers — even though they had yet to learn to whom those pagers belonged. The judges were okay with that, too, and signed another order allowing the suspect pagers to be “cloned” by detectives, even though in some cases the suspect in possession of the pager was not yet positively identified.

Point taken. But Simon’s point only goes so far. Suppose, instead, his detectives had gone to a judge and asked for permission to monitor calls on every pay phone in Baltimore County; to monitor those phones indefinitely; to use the records for any purpose they chose; and to keep those records permanently. Would the judge still have approved it?

I’m guessing not. But that’s what’s been approved for the NSA. It’s very different from Simon’s example in Baltimore, and one thing that surprises me a bit is how little of the conversation surrounding the NSA program has addressed the key reason for this difference: Simon’s detectives were focused on a specific enterprise happening in the present. NSA is focused on anything that might happen in the future.

This cuts both ways in the debate. On the one hand: I find it quite likely that NSA isn’t currently abusing the phone surveillance program. They really and truly don’t care about Occupy Wall Street. They care about Al Qaeda, and that’s where their focus is. But who cares? Programs like this often start with good intentions. The problem is that this kind of indefinite data collection makes abuse far more likely in the future. Someday there will be a different president in the White House, there will be a different head of NSA, and there will be different professionals running the program. What will they do with all that data the next time something happens that makes America crazy for a few years? I don’t know, but I do know that if they don’t have the data in the first place they can’t abuse it.

On the other hand: You can make a pretty good case that groups like Al Qaeda are only truly dangerous if they get their hands on nukes or weaponized biological weapons. So our real counterterrorism emphasis, the place we should be willing to spare no effort, should be on preventing that. But nukes and biologicals are hard things to get hold of, and they can’t be acquired solely via carrier pigeons and couriers. One way or another, they’ll almost certainly leave a digital footprint, and this means that our best way of preventing a mass attack is to keep very close track of digital communications around the globe. Thus the need for NSA’s phone surveillance database.