Ramesh Ponnuru argues today that Republicans are foolish for hanging their hats on the likelihood that Obamacare will die a fiery death in 2014, sweeping them into control of Congress and then, two years later, into the presidency. That won’t happen, he says. Instead, Obamacare will 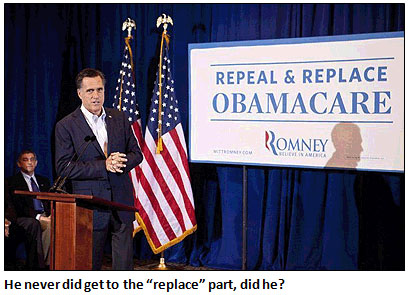 die a slow, painful, lingering death, and Republicans need to get busy now coming up with a replacement healthcare plan for when that happens. But what should it be?

Congressional Republicans have not reached agreement on what should replace Obamacare, let alone a strategy for enacting that replacement. The best option for replacing Obamacare would be a plan that made it possible for almost everyone in the country to purchase catastrophic insurance (and possible for most people to buy insurance that goes beyond catastrophic coverage) by removing the obstacles that government policy puts in the way of that goal.

A plan to do that would involve six key steps….

I’ll spare you the six steps. It’s all the usual stuff—catastrophic coverage, high-risk pools, tax reform, etc.—and I think Paul Waldman’s response pretty much says what needs to be said:

The biggest problem with this kind of appeal is that he will never, ever get anything beyond a tiny number of Republicans to invest any effort in coming up with a health-care plan. That would involve understanding a complex topic, weighing competing values and considerations against one another, and eventually getting behind something that will be something of a compromise. And let me say it again: They. Just. Don’t. Care.

I don’t blame Ponnuru and others for trying to get conservatives to embrace some kind of healthcare plan. I think they’re kind of crazy to think their proposed plan would (a) work, (b) be politically attractive, or (c) be popular, but maybe that’s just my liberal bias talking. What’s not my liberal bias talking, however, is the plain fact that conservatives don’t care about expanding access to healthcare. As Waldman says, the evidence on this score is overwhelming. They opposed Medicare. They opposed CHIP. They’ve opposed every expansion of Medicaid ever. Only brutal strongarm tactics got them to support their own president’s prescription drug plan, despite the sure knowledge that killing it would likely lose them the White House the following year. And of course, they’ve opposed every Democratic attempt to pass universal healthcare legislation in the last century.

During that same period, Republicans have never shown any interest in a plan of their own. They periodically put on a show whenever Democrats propose something that looks like it might have legs, but it’s purely defensive. When the threat goes away, so does the show. This has happened like clockwork for decades.

There is no way—repeat: no way—to broaden access to healthcare without spending more money. That’s something Republicans have never been willing to do, and they’re less willing now than ever. Nor is there any way to tap dance around this. You can try, but you’ll get caught pretty quickly. There’s just no way to square this circle.