Matt Yglesias is traveling in Europe right now, so naturally he’s complaining about America’s continued reliance on absurdly outdated magnetic stripe technology for its credit cards. Chip-and-PIN smart cards are used almost everywhere in Europe, which means that old style American cards often won’t work—sometimes because automated kiosks won’t accept them and sometimes because befuddled clerks have never seen one before and don’t know what to do about them. As you may recall, I whined about this last year before my family trip to Denmark and Italy.

Anyway, this got me curious: how are things going on the chip-and-PIN front? So I did a bit of googling and at first the news seemed good: a growing number of American card companies offer smart cards, some with no/low annual fees and no foreign transaction fees. Hooray! But as I continued looking into this, it turned out that virtually none of them were truly chip-and-PIN cards. American banks have instead decided to invent a 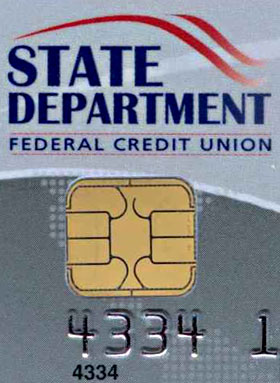 whole new technology called chip-and-signature. WTF? Is this actually any more likely to work in Europe than an old school mag stripe card?

Most of the articles I read were frustratingly vague on this point, but this one from John Kiernan seems pretty authoritative and boils down to: no. Contrary to the happy talk from U.S. card flacks, “practical experience and consumer feedback indicate that you can still use magnetic stripe credit cards pretty much anywhere that will accept a chip-and-signature card. And the few places where magstripe cards don’t work (i.e. certain unattended kiosks), chip-and-signature cards don’t tend to work either.”

OK then. It’s basically a marketing scam. But we’re still left with a question: why don’t U.S. banks just offer real chip-and-PIN cards? They aren’t expensive, and the technology is well understood since every bank in Europe does it. What’s more, chip-and-PIN cards all have mag stripes on the back, so they’ll work fine in U.S. machines too. What’s the deal?

According to Kiernan, banks just don’t feel like it because they don’t have any incentive to do it at the moment. Plus this:

In addition, there are certain transitional, regulatory and logistical issues for banks that explain why they have not simply adopted chip-and-PIN credit cards.

In any case, the bottom line seems to be that things are now worse than ever. If you sign up for a “smart card” from a U.S. bank, you’ll feel more secure before you travel to Europe, but in fact you’ll be every bit as vulnerable as you were before. It’s the kind of unconscionable bamboozlement I’ve come to expect from the American banking industry. My advice for European travelers: hope for the best, but always carry a fair amount of cash with you just in case.

And what if you want a real chip-and-PIN card? Well, apparently the State Department Federal Credit Union, which anyone can join through its partnership with the American Consumer Council, offers one. So there’s that. And USAA has a genuine chip-and-PIN card for its members. Aside from that, your only real option is to wait until 2015, when chip-and-PIN is allegedly going to get rolled out in the United States. Yeesh.