What happens to women who want abortions but can’t get them? Abortion clinics all have “gestational deadlines” and will turn away women who are further into pregnancy than their rules allow, and this gave Diane Greene Foster, a professor of obstetrics and gynecology at UC San Francisco, an idea for a study. Instead of 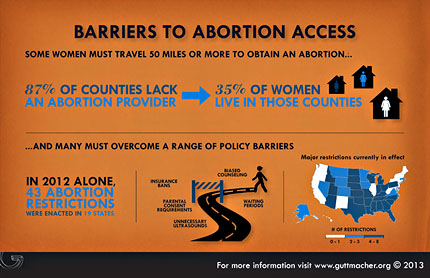 comparing women who have abortions to women who elect to carry their pregnancy to term, she compared a group of women who all wanted to have an abortion but didn’t all get one:

By choosing the right comparison groups — women who obtain abortions just before the gestational deadline versus women who miss that deadline and are turned away — Foster hoped to paint a more accurate picture. Do the physical, psychological and socioeconomic outcomes for these two groups of women differ? Which is safer for them, abortion or childbirth? Which causes more depression and anxiety?

That’s from Joshua Lang in the New York Times today, who explains what Foster found:

When she looked at more objective measures of mental health over time — rates of depression and anxiety — she also found no correlation between having an abortion and increased symptoms….Turnaways did [] suffer from higher levels of anxiety, but six months out, there were no appreciable differences between the two groups.

Where the turnaways had more significant negative outcomes was in their physical health and economic stability….Women in the turnaway group suffered more ill effects, including higher rates of hypertension and chronic pelvic pain….Even “later abortions are significantly safer than childbirth,” she says.

….Economically, the results are even more striking. Adjusting for any previous differences between the two groups, women denied abortion were three times as likely to end up below the federal poverty line two years later. Having a child is expensive, and many mothers have trouble holding down a job while caring for an infant. Had the turnaways not had access to public assistance for women with newborns, Foster says, they would have experienced greater hardship.

The whole story is worth a read. In the long run, women who want abortions but don’t get them adjust to their new lives. They aren’t unhappy at becoming mothers. But there’s not much question that their lives suffer, and as more and more states put more and more roadblocks in the way of abortion providers, that suffering will increase—with no mitigation from increased social services, since the red states that oppose abortion also generally don’t think highly of providing much in the way of services to mothers in poverty.