Most of you probably know this already, but it’s worth a reminder. All those red states that are passing anti-abortion laws usually emphasize the provision that bans abortions after 20 weeks. That tends to poll pretty well. But it’s mostly a charade:

While all the attention is going to the 20-week bans, they’re not the point, not by a long shot….The 20-week bans are just the most high-profile component of larger pieces of legislation whose goal is to make it impossible for women to get abortions at all, no matter what the stage of their pregnancies. The bills are inevitably crafted with provisions that will shut down as many abortion clinics as possible. Abortion clinics often require doctors from out of state to travel to the clinic, because of the harassment, threats, and even assassinations that local doctors have been subject to? Then we’ll require that every doctor have admitting privileges at a hospital within a certain number of miles, which out-of-state doctors won’t have. And we’ll throw in some rules on how wide your hallways need to be (not kidding), meaning in order to stay open you’d have to do hundreds of thousands of dollars of 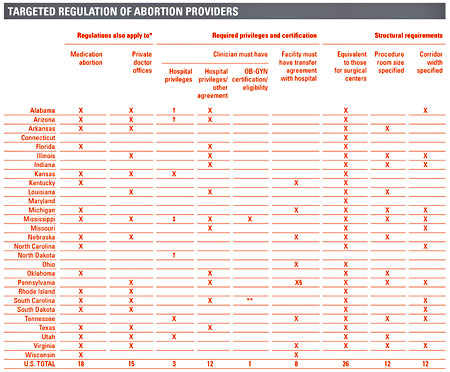 remodeling. Failing that, we’ll make sure that women who need abortions will have to suffer as much inconvenience, expense, and humiliation as possible.

It’s these provisions, much more than the 20-week bans, that will make the largest difference for women in these states. Depending on what state they’re in, they’ll have to travel far—in some cases hundreds of miles—pay for hotels because of waiting periods, get lectures from doctors required to lie to their patients about things like a fictional link between abortion and breast cancer, and submit to forced and medically unnecessary procedures. These kinds of provisions aren’t new, but this latest wave is occurring under the rubric of 20-week bans that are much more likely to be met with public approval, or at least the indifference most state legislation receives. Opponents of abortion rights are hoping they can get a case to the Supreme Court that will result in Roe v. Wade being overturned, but even if that doesn’t happen, they can still succeed in making abortion virtually illegal in states where they have control. And they’ve made lots of progress already.

Like I said, you probably already knew this. But it can’t hurt to hear it again. More here.