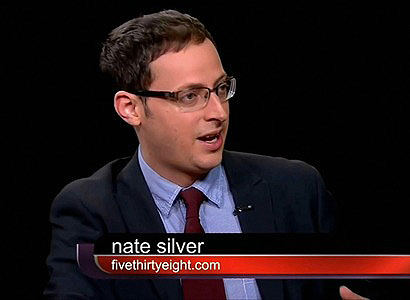 Why did Nate Silver leave the New York Times? Public editor Margaret Sullivan thinks that part of the reason is that he was never fully accepted by the paper’s old guard:

I don’t think Nate Silver ever really fit into the Times culture and I think he was aware of that….His entire probability-based way of looking at politics ran against the kind of political journalism that The Times specializes in: polling, the horse race, campaign coverage, analysis based on campaign-trail observation, and opinion writing, or “punditry,” as he put it, famously describing it as “fundamentally useless.”

….The first time I wrote about him I suggested that print readers should have the same access to his writing that online readers were getting. I was surprised to quickly hear by e-mail from three high-profile Times political journalists, criticizing him and his work. They were also tough on me for seeming to endorse what he wrote, since I was suggesting that it get more visibility.

Even for those of us who are pretty cynical about political reporting, this is astonishing. If I were editor of the Times, I’d do whatever it took to find out who those three are, and then fire them instantly. Whoever they are, they shouldn’t be trusted to cover the pig races at a country fair, let alone write about politics for the most influential newspaper in the country.

At the same time, this tidbit from Politico about Silver’s decisionmaking process while he was weighing competing offers from the Times and ESPN worries me just a little:

Silver had told The Times that he wanted to expand to weather, economics and anyplace else at The Times that had statistics and numbers he could bring to life….Nate will appear on the air on ESPN and ABC, and will get “verticals,” or web hubs, devoted to a variety of new topics. He’s very interested in education, so there’s been a lot of conversation about that.

But weather, economics, and education? I’m skeptical that you can just parachute into those fields and add a lot of value. They’re far more complex, are already heavily populated with sophisticated statistical modeling, and generally require some serious subject matter expertise in addition to raw number-crunching skill.

It’s possible that I’m just overreacting to a brief throwaway mention in the Politico piece. If all Silver is trying to do is improve on mainstream news reporting of number-heavy topics, that shouldn’t be too hard. Still, I’d hate to see the basic 538 model get naively overextended into anything that has lots of numbers attached to it. It’s one thing when bloggers (like me) throw up simple wonk-lite analyses of complex topics. After all, no one really takes us seriously as experts. But the 538 brand is all about expertise. It’s inherent in everything that appears there. I hope Silver is careful about what he takes on as he extends his brand.