Steve Benen and Paul Krugman give PolitiFact the going over they deserve on this, but this affair mostly just confirms my belief that the whole fact-checking enterprise is misguided. As usual, the problem here isn’t so much facts per se, but how you interpret them and which facts you think deserve the most attention. In Cantor’s case, he initially brought up the deficit in the context of the “underlying problem” of “entitlement programs and unfunded liability.” A few seconds later he mentioned again that the “real problem” is entitlements, and then a few seconds after that he said it was time for us all to come together “and try and tackle the real problem which is the entitlements.”

It was only in his next reply that he talked about “the ultimate problem, which is this growing deficit.” This is technically wrong, but in the context of Cantor’s repeated concern with entitlements, it’s not really a stretch to believe that by “ultimate” he 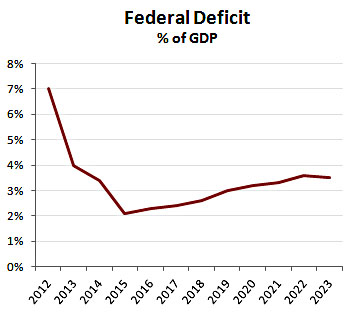 was referring to the long-term deficit trajectory.

So what is PolitiFact‘s role here? If you think it’s very narrow fact-checking, then Cantor is just dead wrong and he deserves their worst score. If you think they should try to take into account the context of his statement, then Cantor wasn’t deliberately trying to mislead anyone but gets dinged for not being a little clearer.

Which is it? The problem is that once you get into context and interpretation, you can’t really say you’re fact-checking anymore. But if you take the narrow view, you’re going to end up constantly nitpicking over trivia. Occasionally things will be easy and you’ll catch a flat-out whopper, but most of the time political lies are more sophisticated than that.

There’s really no great answer here. I wrote a piece recently for the magazine (on newsstands soon!) about austerity and deficits, and one of the charts included with the story shows the deficit declining from 2010 through 2016. Is that misleading? Should I have included a chart that goes through 2023 so that everyone can see that deficits are likely to start increasing in a few years? I don’t think so, because my piece wasn’t about long-term deficits. It was about austerity right now and its effect on recovery from the 2008-09 recession, which meant I was only concerned with the trajectory of the deficit right now. But someone with a more hostile reading of my piece could say that I was cherry picking to make the deficit look less scary than it really is. In the end, it’s a judgment call.

Not everything is a judgment call. Some stuff is just flat wrong. But most of the time, what’s important is which facts you choose to highlight, which you choose to ignore, the context of the facts, the intent of the speaker, and the values both speaker and audience think are most important. That’s not stuff you can fact-check, it’s just stuff you can explain.