Yesterday Paul Krugman suggested that the neoclassical synthesis in economics—”the idea that we can use monetary and fiscal policy to make the world safe for laissez-faire everywhere else”—has failed its biggest real-world test: guiding us safely out of the financial collapse of 2007-08. It’s not that printing money and running big deficits don’t work. Krugman thinks they do. But the events of the past few years have shown that it’s politically impossible to keep them going long enough to truly do the job of rescuing an economy in crisis. Central banks chicken out when their balance sheets get too scary looking, and national legislatures chicken out when deficits get too scary looking. It’s obvious that national leaders simply aren’t courageous enough to keep up the therapy long enough to cure the patient.

Krugman obviously has a point, but I’m less pessimistic than him for two reasons. First, the 2008 crisis and the subsequent recession had a couple of unique political features. In the United States, we had the rise of the tea party and its nihilistic approach to partisan politics. That won’t necessarily last forever. In Europe we had the problem of a new and shaky currency union. That will either implode completely or else it will eventually morph into a true fiscal union. In either case, the euro straitjacket will be gone.

Second, as Ryan Avent writes today, we have learned something since the Great Depression. When the financial crisis hit, the Fed flooded the market with liquidity. It kept 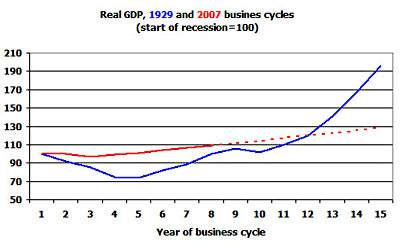 the banks open. Congress passed TARP. And a stimulus package and then a mini-stimulus were both put in place.

That wasn’t enough. Politically, as Krugman says, we lost our nerve before we finished the job. Nonetheless, it was a helluva lot more than we did in response to the Great Depression, and as Avent’s chart on the right illustrates, it shows up in the economic data. The financial crisis of 2007-08 was as bad as the crisis of 1929-32—maybe worse, in fact—but the subsequent course of the economy has been way better and the aggregate amount of human misery has been way less. Avent looks at the long term:

Through the first 12 years of these experiments, today’s macroeconomic-policy framework (consisting of a much more robust safety net, countercyclical monetary and fiscal policy, and aggressive action to prevent financial-sector collapse) is clearly better than the one we had around in the 1930s….The “massive waste we’ve seen since 2008” has nothing on the waste of the 1930s and 1940s. In the absence of an alternative politico-economic framework that looks capable of delivering even better results we should be extremely reluctant to abandon the current working strategy.

A second thing to keep in mind is that the policy revolutions that develop in the aftermath of a macroeconomic disaster can take decades to run their course. We can very reasonably be frustrated with the policy performance of the past six years while also remaining hopeful that the intellectual battle will eventually be decided in a positive way.

….We learn from failure. It took the Great Recession to tell us where there has been intellectual progress in the fields of economics and political economy and where there has not. But there has been progress and there almost certainly will be more: building on the strengths of the broad neoclassical synthesis. If the trials of the last half decade yield one-tenth the intellectual dividend of those of the 1930s, then the world has good reason to expect the future to be quite a lot better than the past, in much the same way that the recent past is a world apart from the horrors of the 1930s.

Our shift to deficit hysteria in 2010, a mere six months into the recovery, was unprecedented in recent history. Government spending has kept increasing for years in the aftermath of every other recent recession, and only in this one did it actually decrease in real terms. This was the result of tea party know-nothingism, and the entirely unnecessary human immiseration it caused is an endless source of shame—or should be, anyway. So it’s easy to see why Krugman feels the way he does. But the tea party won’t last forever, and in any case, even they weren’t able to prevent us from acting rationally enough to stave off the worst. Economic progress may be slow, but it’s not nonexistent.