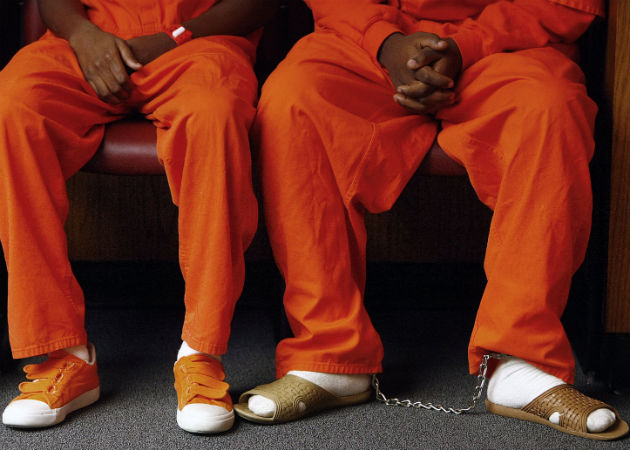 I know, I know: I’m a broken record on the subject of lead exposure in kids and crime rates 20 years later. But there’s lately been a renewed focus on black crime and black incarceration rates, as well as the racial profiling of blacks and Hispanics in New York City’s stop-and-frisk program. Guess what? The lead theory has something to say about that.

For starters, did you know that arrest rates for violent crime have fallen much faster among black juveniles than among white juveniles? They have, as the charts below show. Rick Nevin explains why: 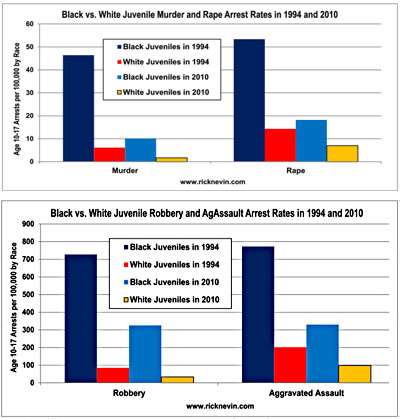 There have been, and still are, lots of potential explanations for the disparity in violent crime rates between black and white teens: the toxic legacy of racism and slavery; poverty rates in inner cities; gang culture; and many more. But as Nevin points out, none of the popular theories explains the dramatic rise and fall of crime over the past 50 years, nor in particular why black crime declined more than white crime starting in the early 90s. That’s because none of the usual suspects has varied dramatically in the past 20 years. Family structure in black households has been largely unchanged; poverty went down but then went back up; and incarceration rates haven’t increased.

But the number of kids with toxic levels of exposure to lead has decreased steadily throughout the entire period, and it decreased far more among black kids than white kids. It’s true that black juvenile crime rates are still higher than white juvenile crime rates, but they’re nowhere near the levels that caused so many people to live in fear in the 70s and 80s. Nevin wishes more people knew about this:

If the public were more aware of the magnitude of the ongoing changes in juvenile arrest rates, then law-abiding youths might not be unfairly viewed as interchangeable with juvenile criminals….The fact that black children still had disproportionately elevated blood lead in 2007-2010 is an egregious racial injustice. The fact that the news media fails to recognize the magnitude of ongoing declines in juvenile arrest rates creates other injustices, sometimes veiled in a cloak of sympathy, sometimes in the form of an ominous lecture, and sometimes in the form of arrest rate trends for minor offenses.

No one pretends that lead exposure is the only source of crime, or the only source of disparity in crime rates. But it’s a big part of the picture, and the plain fact is that a lot of people are still living in the past when it comes to fear of black teens. Thanks to falling lead exposure, both black and white teens are far less violent than in the past, and the fall has been most pronounced among blacks. If we wanted to, we could produce even further declines by reducing lead exposure among black toddlers to the same levels as white toddlers, but we’re not there yet because blacks still live disproportionately in old housing and in areas where lead dust from nearby highways settled into the soil decades ago. That’s due to the toxic legacy of racism, redlining, poverty, and more. But we could fix it, even if we can’t entirely overcome racism itself.

The bottom line is simple: We poisoned them. We owe it to them to clean up the poison, not just lock up their kids.