Eliezer Yudkowsky asks Tyler Cowen today why he thinks the coming robot revolution1 will be a problem for employment. After all, the Industrial Revolution automated a lot of work too, and it worked out fine for employment. The answer to this, I think, is simple: the robot revolution will automate cognitive work, not just manual work. A machine that can literally do anything a human can do will certainly boost economic growth, but it won’t create more human employment in the process. It will just create more 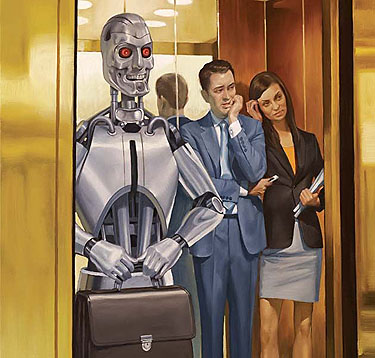 robot employment. For a little more detail on this, you can read a short version of the argument here and a longer version here.

But Cowen suggests that you don’t need to buy this to believe that robots are going to create big employment shocks anyway. You just need to look at the history of employment during the Industrial Revolution in a little more detail than we usually do:

I would challenge the notion that it went fine. Think of the machines of the industrial revolution as getting underway sometime in the 1770s or 1780s. The big wage gains for British workers don’t really come until the 1840s. Depending on your exact starting point, that is over fifty years of labor market problems from automation.

….A second point is that now we have a much more extensive network of government benefits and also regulations which increase the fixed cost of hiring labor. Insofar as automation creates short-run adjustment problems, those problems are more likely to show up in the form of decreased labor force participation than they did in previous eras. We are living in a time where the long-run trend is for labor force participation to fall in any case, and that was not in general the case during those earlier episodes.

Extrapolating a bit from Cowen’s point, the problem here is that the robot revolution is likely to be a lot shorter than the Industrial Revolution. Back then, we endured 50 years of employment problems and then things started to get better. But 50 years from today, the robot revolution is likely to be all but over. By the time we might start to expect wage gains, robots will be advanced enough that no more than a tiny percentage of human work is still relevant.

What this means, of course, is that we’d better start thinking about how we’re going to divvy up all the goods and services we produce when virtually none of them are the result of human labor. Call it Economics 3.0. We aren’t there yet, but we might want to start getting ready for it.

1Assuming that it really does come, of course, which we’re assuming for the purposes of this blog post.