Tyler Cowen is perplexed by the size of the market reaction to the Fed’s announcement that QE3 will continue along its present path for the foreseeable future instead of being tapered down. After all, the difference between taper and non-taper is only a few tens of billions of dollars of bond purchases. That’s peanuts, Cowen says, and it doesn’t make sense:

I’ll say it again: none of you understand what is going on here, and neither do I. I am not seeing enough admission of this basic fact.

I’ll cop to that. I do think we have a pretty good idea in a general sense of what caused the Great Recession and what kind of government response would have been best: extremely loose monetary policy combined with massive fiscal stimulus. There’s a lot of evidence that this would have improved the economy fairly quickly, and we might very well be back to trend growth today if we’d done it. Unfortunately, the initial stimulus was too constrained and the austerity zealots made sure that not only did we have no further stimulus, but 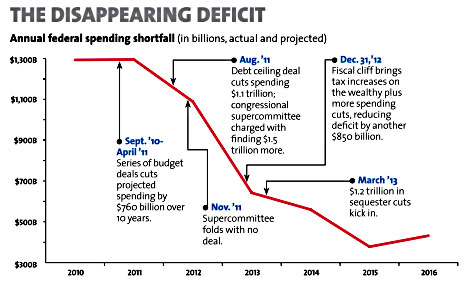 we slashed spending massively at the very time we should have been spending more.

But what’s done is done. The question now is what kind of impact nonconventional monetary policy has on a slowly recovering economy that still has lots of slack. And there, I’m with Cowen: it’s really hard to make sense out of the evidence. Scott Sumner, for example, says the market reacted strongly to the Fed’s announcement because it was unexpected and signaled not just a change, but a change to a completely different policy regime. I have to say that I find that strained. It’s become almost faddish to believe that all a central bank has to do is set expectations properly and everything else will magically fall into place, but it’s not clear that the evidence backs this up. The expectations channel, after all, depends on the market believing that the Fed has an actual operational channel that can produce whatever results it wants. If that’s true, there’s no point in fighting, and the market will bring about the results the Fed wants with no actual Fed action necessary. That would be pretty cool if it were true. But what if the market becomes skeptical of the Fed’s power? It doesn’t matter why. It might be skeptical for fundamental economic reasons; or because it thinks the Fed is politically constrained; or because it thinks overseas leakage is important; or because it simply disagrees with the Fed’s likely strategy. If that happens, then the expectations channel isn’t that powerful after all—and I don’t think any of us know to a certainty just how the market judges either the Fed’s commitment in the face of pressure or the effectiveness of its nonconventional open market operations if it’s forced to show its hand. The financial channels the Fed manipulates are just too murky.

This stuff is all way over my pay grade. I’ve seen bits and pieces of evidence that make me think the expectations channel is significant, but far from omnipotent. I’ve also seen bits and pieces of evidence that just seem damn strange. Maybe someone will come along soon and present us with a comprehensive new theory of monetary policy in the context of 21st century financial markets, but I don’t think we’ve seen it yet.