The history of presidential warmaking has always been complex and fraught, and it’s been even more so in the post-Vietnam era governed by the War Powers Act of 1973. No president has ever acknowledged that the Act is binding on the executive, and despite both the Constitution’s explicit grant of warmaking powers to Congress and the WPA’s equally explicit requirement of congressional approval for extended military action, until recently presidents of both parties have sought congressional approval for military force only grudgingly if at all. Ronald Reagan invaded Grenada without asking for congressional authorization. George Bush Sr. eventually sought approval for the Gulf War, but did so only under intense pressure and with troops already massed and ready. However, he didn’t bother with Congress at all before he sent troops to either Panama or Somalia. Likewise, Bill Clinton sent troops to Haiti despite explicit congressional opposition, and later insisted that he didn’t need 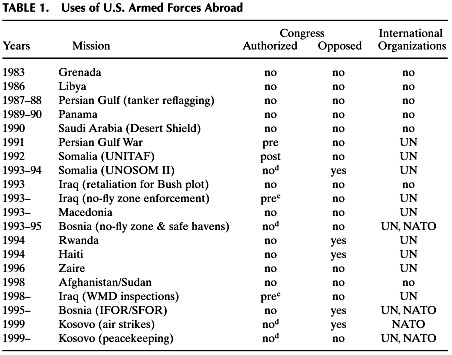 congressional authorization for the war in Kosovo—after which Congress famously dithered for months, refusing to either support or oppose the air strikes cleanly. And this doesn’t even count fuzzier operations like Reagan’s covert wars in Afghanistan and Latin America.

In 2001, though, things changed. Despite his famously broad views of executive power, George Bush Jr. did seek congressional authorization for both the Afghanistan and Iraq wars. And when Obama was asked in 2007 about the possibility of bombing Iran in order to halt its nuclear weapons program, he was unequivocal about the president’s authority as commander-in-chief:

The President does not have power under the Constitution to unilaterally authorize a military attack in a situation that does not involve stopping an actual or imminent threat to the nation….History has shown us time and again, however, that military action is most successful when it is authorized and supported by the Legislative branch. It is always preferable to have the informed consent of Congress prior to any military action.

This is why I’ve been so disappointed in President Obama’s use of military force. It’s not that his use of the military has been self-evidently stupid. There was arguably a genuine humanitarian crisis in Libya that could be addressed at fairly low cost, and Bashar al-Assad’s use of chemical weapons against Syrian rebels is arguably a red line that the international community really should react to sharply.1 Nor is it because I’m really all that worried about escalation. I’m a little worried about it, but the truth is that Obama has generally shown pretty good sense here. He finished up George Bush’s exit from Iraq on schedule; he kept U.S. involvement in Libya modest; and even after committing himself to escalation in Afghanistan he’s shown himself equally committed to disengaging there on his original timetable instead of continually insisting that “one more year” will make all the difference.

Nor, in this case, is it because Obama has handled Syria poorly—although he has. As I said the other day, Greg Djerejian’s rant about the Obama team’s all-too-public mishandling of practically every facet of this operation is mostly fair. At the same time, “There’s always a lot more messiness to these things than we think there should be, and often more messiness than we remember about similar episodes in the past.” Obama may have screwed this up, but previous presidents have done much the same.

So it’s not that either. The real reason I’m disappointed is that Obama had a chance to set a new precedent in foreign policy and didn’t take it. Whatever else we liberals might think about George Bush’s military acumen, he left office having explicitly asked Congress to authorize both of his major military actions before he undertook them. If Obama had acknowledged the War Powers Act as good law, acknowledged Congress’s constitutional role in warmaking, and then voluntarily asked Congress for authorization of his proposed military operations in both Libya and Syria without being pressured into it, there’s a good chance that future presidents would feel bound to do the same. This is the way norms become settled, and this is a norm that would have truly changed Washington DC for the better.

But he didn’t do that, despite his apparent belief in 2007 that it was the right thing to do. It was a missed chance, and a disappointing one. I had hoped for better.

1For a variety of reasons, I’m not personally persuaded of this. But it’s not self-evidently stupid.