Are you ready for the next big right-wing conspiracy theory? Sure you are! Naturally it’s about Syria.

There have long been mutterings that the chemical attack in Ghouta was a false-flag operation. That is, the Syrian opposition actually carried out the attack, hoping that Bashar al-Assad would get blamed and President Obama would retaliate with a huge bombing campaign. But it’s just been mutterings. Today, though, Rush 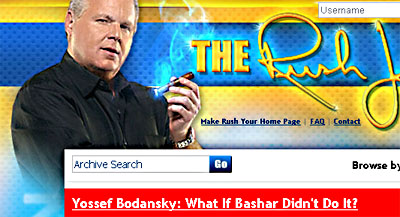 Limbaugh upped the ante, jabbering on air about an article by Yossef Bodansky titled “Did the White House Help Plan the Syrian Chemical Attack?”

Got that? Not just a false flag operation that snookered the idiot-in-chief, but an operation actually put in motion by the White House. Bodansky, an Assad sympathizer who has previously suggested that the 1995 Oklahoma bombing was orchestrated by Iran and that Saddam’s WMDs all ended up in Syria, tells a simple story. Starting on August 13, at a meeting between Syrian opposition leaders and representatives of Qatari, Turkish, and US intelligence, senior opposition commanders told everyone to expect “a war-changing development” which would soon lead to a U.S. bombing campaign in Syria. Shortly afterward, a huge cache of weapons was released to the rebels under the supervision of US intelligence, and they were told to get ready to use them. Sure enough, a few days later a major chemical attack took place and Assad got the blame:

….The descriptions of these meetings raise the question of the extent of foreknowledge of US Intelligence, and therefore, the Obama White House….At the very least, they should have known that the opposition leaders were anticipating “a war-changing development”: that is, a dramatic event which would provoke a US-led military intervention.

[Evidence is then laid out that Syrian rebels really did launch the chemical attack and Assad had nothing to do with it.]

….How is that US Intelligence did not know in advance about the opposition’s planned use of chemical weapons in Damascus? It is a colossal failure. And if they did know and warned the Obama White House, why then the sanctimonious rush to blame the Assad Administration?

In summary: the Syrian opposition carried out the chemical attack, and they did it with the foreknowledge of the United States. Or maybe even worse: perhaps the United States actively coordinated the whole thing. As one eager Dittohead put it, “RUSH LIMBAUGH SAYS ADOLF OBAMA BEHIND NERVE GASSING OF SYRIANS!!!” That’s an exaggeration, of course. Rush is just saying it’s “a very possible scenario.” Like Hillary Clinton’s murder of Vince Foster.

This story hasn’t produced a flashing red siren from Drudge yet, so I suppose it doesn’t quite count as the fever swamp’s latest pet theory. But I imagine that’s coming soon.