All the chatter today on Syria is about the Kerry/Putin/Assad proposal that would put off U.S. military action while the UN talks about putting inspectors on the ground who would take control of Syria’s chemical weapons. (And its biological weapons 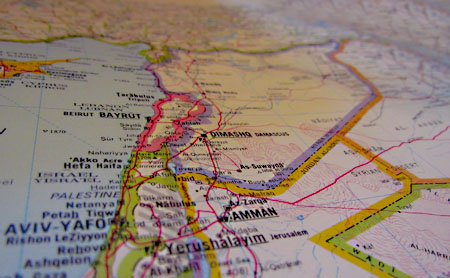 too, presumably, though no one is mentioning that.) Ed Kilgore figures that Obama has three options now:

(1) Press forward with the original resolution….(2) Come up with an amended resolution that explicitly makes the authorization for military action contingent on the failure of a diplomatic initiative to remove or control chemical weapons within a given time-frame (45 days). This is the approach being worked on by Democratic Sens. Joe Manchin and Heidi Heitkamp, apparently in close consultation with the White House….(3) Take credit for the new peace initiatives and hold off on votes in Congress indefinitely.

….At this point I see no evidence the White House is going with the third approach, but I sure would if I were in their position. Yeah, you can say the French/Russian peace initiative will enable Obama to say tonight that being willing to go to war is the only way to get peace, but the problem with public opinion on Syria is that Americans aren’t sure anything that does or doesn’t happen there is worth the risk of war. The Manchin/Heitkamp approach doesn’t address this problem, either, and is certain to repel Republicans who don’t want the “fight” with Syria limited to the chemical weapons issue and/or don’t want a multilateral “solution.”

Not so fast. Actually, I think Option 2 has at least a chance of turning public opinion around. It’s true that there are plenty of Americans who just flatly don’t want to get involved in Syria, but it’s probably also true that at least some of the skeptics are concerned about whether we’re reacting to a one-off use of chemical weapons. If they were persuaded that Assad is likely to escalate and turn rebel-controlled areas into an abattoir of gas attacks, they might change their minds. If Obama goes along with the UN idea, and can then show that Assad is stalling and obfuscating, he could use this as evidence that Assad plainly has imminent plans to use his chemical arsenal as soon as the UN team is finished. At the very least, it would certainly strengthen Obama’s hand if Assad goes ahead and launches another gas attack after the UN team leaves.

I’d say that this is probably a slim chance. The more time that goes by, the more likely Americans are to forget the whole thing. And no one should underestimate Assad’s ability to tap dance for a long time with the UN inspection team. Still, if it’s handled right, I think it’s possible that letting the UN proposal play out could strengthen Obama’s hand with both the public and with Congress.