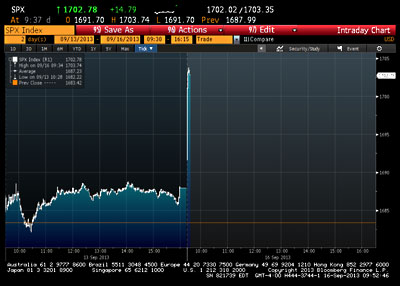 Neil Irwin points to the chart on the right, which shows the stock market’s reaction to news that Larry Summers is no longer a candidate for chairman of the Federal Reserve:

What is going on here? The answer that Wall Street analysts are coming up with is simple: Call it the Yellen Rally. It now looks like Janet Yellen, the Fed’s vice chairwoman, is the most probable candidate for the Fed chairmanship, and she is viewed as more dovish, or soft on inflation, than Summers. That would imply that the Fed would keep interest rates lower for longer, and would choose a more gradual wind-down of its bond-buying program

….Other market measures don’t quite fit the story, though. For example, if one expects a Yellen Fed to be softer on inflation than a Summers Fed, you would look for measures of expected inflation to spike on the news of Summers’s withdrawal. But Monday morning, the spread between inflation-adjusted and non-inflation adjusted bonds implied that investors expect average annual inflation of 1.8 percent over the next five years — exactly where it closed Friday.

I never know quite what to think about this stuff. The effect here is sharp enough and localized enough that it seems as if Summers really is the cause. But come on. I was on Team Yellen myself, but the truth is there was never really all that much policy daylight between Summers and Yellen. It’s crazy for investors to react very strongly to this news.

And Irwin’s final conclusion is even crazier. He figures the market must view Yellen as more dovish on inflation, but inflation expectations have been stable. Hmmm. So why is the market really reacting this way? Here it is: “The prospect of a Summers nomination had put a pall of uncertainty over markets….His Senate confirmation would have been polarizing and contentious, with the outcome in the air until the final vote count….Markets are rallying because the prospect of months of being whipsawed by uncertainty over the Fed’s future direction have diminished.”

Besides, if financial markets are really this spooked by uncertainty, shouldn’t the princes of Wall Street be working like lemmings behind the scenes to persuade Republicans to back off the cliff and agree to both a budget and a debt ceiling increase? But they haven’t been. Oh, their preferences are clear, but we know what it looks like when they’re putting on a full-court press, and they aren’t doing it. Why not?

I dunno. Something doesn’t add up here.