Dr. Russell Saunders is pissed off:

As I’m sure comes as no surprise, I prescribe a lot of medications….One medication I prescribe with great frequency is albuterol, a bronchodilator. Asthma is a very common childhood illness, and one that primary care providers can often manage without consulting subspecialists.

The reason why there are none on the market and thus patients (or their insurance companies, if they are blessed with good coverage) are forced to pay for the name brands is contained in this horrifying and infuriating article about pharmaceutical pricing in the New York Times. If it does not make your blood boil, then I congratulate you for having a more even temperament than I.

I’m pretty sure that I don’t have a more even temperament than Saunders, but I do have one advantage over him: I already knew what was going on with asthma inhalers even before Elisabeth Rosenthal’s piece—the latest in her series about the high cost 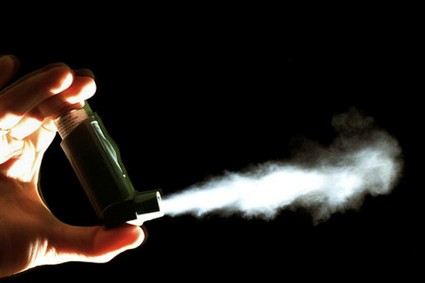 of American health care—appeared a few days ago.

Here’s the short version of the story: as Saunders says, albuterol is a cheap medication because it went off patent long ago. Then, a few years ago, as part of the campaign to eliminate CFCs and save the ozone layer, CFC-based inhalers were set to be banned. Pharmaceutical companies took advantage of this to design new delivery systems and surround them with a thicket of patents. As a result, even though albuterol itself might be off patent, only name-brand asthma inhalers are available—and since there’s now no generic competition the big pharmaceutical companies are free to jack up prices to their heart’s content. And they have. After all, as Rosenthal points out, this isn’t like acne medicine that you can do without if it costs too much. If you have asthma, you need an inhaler, period.

Is your blood boiling? Well, wait a bit. The story is actually even worse than this. You’re probably thinking that what happened here is (a) overzealous environmentalists insisted on banning CFC inhalers even though they don’t really have much impact on the ozone layer, and (b) pharmaceutical companies cleverly took advantage of this to suck some extra money out of asthma sufferers.

Well, the ozone layer was the initial cause of all this, so feel free to place some of the blame on environmentalists if you like. But as it turns out, scientists raised some early concerns about the inhaler ban because the replacement for CFCs was a powerful greenhouse gas. So they suggested that maybe it was better just to make an exception for asthma inhalers and let well enough alone. At that point, the pharmaceutical companies that had been eagerly waiting for the old inhalers to be banned went on the offensive. Nick Baumann picks up the story from there:

The pharma consortium transformed from primarily an R&D outfit searching for substitutes for CFC-based inhalers into a lobbying group intent on eliminating the old inhalers. It set up shop in the K Street offices of Drinker Biddle, a major DC law firm. Between 2005 and 2010, it spent $520,000 on lobbying. (It probably spent even more; as a trade group, it’s not required to disclose all of its advocacy spending.) Meanwhile, IPAC lobbied for other countries to enact similar bans, arguing that CFC-based inhalers should be eliminated for environmental reasons and replaced with the new, HFC-based inhalers.

The lobbying paid off. In 2005, the Food and Drug Administration (FDA) approved an outright ban on many CFC-based inhalers starting in 2009. This June, the agency’s ban on Aerobid, an inhaler used for acute asthma, took effect. Combivent, another popular treatment, will be phased out by the end of 2013.

In other words, pharmaceutical companies didn’t just take advantage of this situation, they actively worked to create this situation. Given the minuscule impact of CFC-based inhalers on the ozone layer, it’s likely that an exception could have been agreed to if pharmaceutical companies hadn’t lobbied so hard to get rid of them. The result is lower-quality inhalers and fantastically higher profits for Big Pharma.

Rosenthal has a lot more detail in her piece about how the vagaries of patent law make this all even worse, and it’s worth reading. But she misses the biggest story of all: none of this would matter if drug companies hadn’t worked hard to make sure the old, cheap inhalers were banned. How’s your blood doing now, Dr. Saunders?