Ross Douthat suggests today that once we finally get HealthCare.gov up and running, the success of Obamacare will mostly depend on how well it’s accepted by young, middle-income families who face premium increases because the law bans crappy insurance policies with huge copays and thin coverage. “The politics of the rollout,” he says, “will probably be defined by how (and how vocally) middle-class Americans just above the subsidy threshold react to this ‘pay more, get more, subsidize other people’ deal.”

This probably doesn’t describe a huge demographic—people who are just barely above the subsidy threshold and currently have individual coverage and are young enough to see premium increases—but there’s no question they exist. Here in California, Chad Terhune of the LA Times gives us an early look at this:

Pam Kehaly, president of Anthem Blue Cross in California, said she received a recent letter from a young woman complaining about a 50% rate hike related to the healthcare law. “She said, ‘I was all for Obamacare until I 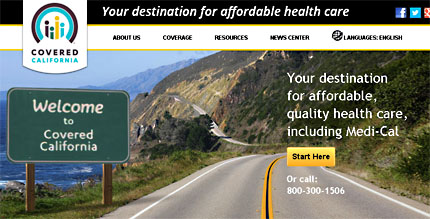 found out I was paying for it,'” Kehaly said.

That’s America in a nutshell, isn’t it?1 I suppose it’s every other country in a nutshell, too. Still, it’s not clear how many people are genuinely going to get hit by sticker shock. In most of the stories I’ve read, including this one, people are simply taking the word of their insurance company about how much a new policy will cost. They may find out that things are better once they actually shop around and check out the subsidies they qualify for. Others may find that the higher premiums pay for themselves in lower out-of-pocket expenses throughout the year. And even for those who have done their homework, the new policies might turn out to be a good deal. Check out this anecdote:

Fullerton resident Jennifer Harris thought she had a great deal, paying $98 a month for an individual plan through Health Net Inc. She got a rude surprise this month when the company said it would cancel her policy at the end of this year. Her current plan does not conform with the new federal rules, which require more generous levels of coverage.

Now Harris, a self-employed lawyer, must shop for replacement insurance. The cheapest plan she has found will cost her $238 a month. She and her husband don’t qualify for federal premium subsidies because they earn too much money, about $80,000 a year combined.

“It doesn’t seem right to make the middle class pay so much more in order to give health insurance to everybody else,” said Harris, who is three months pregnant. “This increase is simply not affordable.”

I don’t know for sure how this plays out in the real world, but I’d be shocked if Harris’s $98 plan covers expenses related to pregnancy. If it does, the out-of-pocket max is probably astronomical. A bronze plan under Obamacare is still no picnic, but I’m willing to bet it covers a whole lot more of Harris’s maternity expenses than her current plan. In other words, there’s a pretty good chance that she’ll make up for her extra annual expense of $1,700 by sometime around, oh, April or so.

This is what makes it so hard to predict how all this is going to play out. Right now, even in places like California that have working exchange sites, a lot of people are still guessing about how Obamacare will actually affect them. There’s no question that some people will end up paying more, but that number could end up being a lot smaller than we think at the moment. Better benefits and federal subsidies are going to have a big impact, and that impact probably won’t be clear until Obamacare has actually been up and running for a while.

Plus, of course, there will be the millions of people that Obamacare just flat-out helps. Andrew Sprung has more to say about this here.

1Did an actual person actually write this to Kehaly? Maybe. In any case, it falls into the category of too good to check.