Paul Krugman alerts me today to the latest argument against the Fed’s policy of keeping interest rates low. Unfortunately, I don’t get it. It comes from bond king Bill Gross, and his argument is that if the yield on other investments—corporate bonds, stocks, private equity, etc.—is as low as the yield on treasury notes, then no one will bother investing their money and the economy will stall. Here’s Krugman:

When I read Gross and others, what I think is lurking underneath is a belief that capitalists are entitled to good returns on their capital, even if it’s just parked in safe assets. It’s about defending the privileges of the rentiers, who are assumed to be central to everything; the specific stories are just attempts to rationalize the unchanging goal.

Interest, classically (and I do mean classically, as in Mr. Keynes and the), is the reward for waiting: there’s supposedly a social function to interest because it rewards people for saving rather than spending. But right now we’re awash in excess savings with nowhere to go, and the marginal social value of a dollar of savings is negative. So real interest rates should be negative too, if they’re supposed to reflect social payoffs.

This really isn’t at all exotic — but obviously it’s a point wealth-owners don’t want to hear. Hence the constant agitation for monetary tightening.

Maybe. But that’s not how I read Gross. His complaint doesn’t seem to be that risk-free returns are low. His complaint is that returns on risky investments are also pretty low. And if those 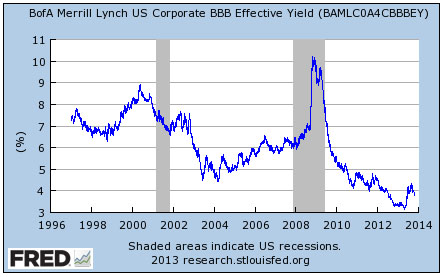 returns are low, investment stalls and the economy suffers.

I don’t understand this. It’s backward. Real investment yields aren’t low because the Fed is keeping treasury rates low. They’re low because the economy sucks and nobody has much confidence in the future. This lack of confidence keeps cash on the sidelines, and this in turn means there’s a huge supply of investment capital competing for a small number of good investment opportunities. When this happens, any project that’s even halfway promising can demand very low rates because investors are all clamoring to be let in. They bid each other down, which produces low yields even on risky investments.

I suppose Gross has some baroque explanation for why this is the fault of low Fed rates, but if he does, it’s nowhere to be found in his investment letter. The boring truth is that if we want higher investment yields, what we need is a stronger economy, one where the middle class is likely to thrive and consumption will increase robustly. In that economy, there are lots of great investment opportunities and yields will increase.

In the meantime, it’s hard to see how raising treasury rates would help things. As best I can make out, Gross is supposing that if Fed rates went up to, say, 3 percent, then corporations would have to offer 5 percent on their bonds. If they did that, then investors would pile in and the economy would start to roar. But that makes no sense. If the hurdle rate for new investments goes up, corporations will simply cut back on their bond issues. It doesn’t matter if investors would love to give you money at 5 percent; what matters is whether your project makes long-term sense even if you have to pay 5 percent for financing. If it doesn’t, the project doesn’t get approved; there are fewer corporate bond issues; and interest rates get competed down once again.

At least, that’s what Economics 101 says. Maybe I’m missing something here. But my take is that the risk premium depends primarily on whether there are lots of good investment opportunities in the real world. There haven’t been for a long time, which is why our economy has been powered by housing bubbles and financial rocket science for the past decade, rather than real-world investment. This investment drought is the problem we need to solve. Fussing over Fed rates is irrelevant.