The Washington Post has a long piece today titled “An effective eye drug is available for $50. But many doctors choose a $2,000 alternative.” It’s the story of Avastin vs. Lucentis, and it’s been making the rounds for years. Oddly, despite the length of the story, the writers never clearly explain precisely what’s going on.

You may recall the name Avastin because it’s been the subject of numerous unflattering news stories. It was introduced in 2004 as a cancer treatment, but it turns out to be mega-expensive even though it usually provides only a few months of extra life. For an average-size person, a single injection runs about 500 mg or so, and injections are 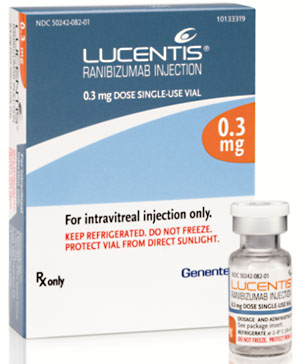 It turns out, however, that the Avastin molecule seemed like it might also be promising for treating Wet Age-Related Macular Degeneration (AMD), which can cause blindness in older patients. So Genentech created a modfied version of the drug and started testing it. While that was going on, however, a few opthalmologists got impatient and decided to just give Avastin a try. AMD treatment requires only slightly more than 1 mg of Avastin, so they’d buy a 100 mg vial and then have it reformulated into smaller doses. It seemed to work great, but the evidence of a few one-off treatments wasn’t as convincing as a full round of FDA clinical testing. So when Genentech brought its modified drug to market under the name Lucentis, it quickly became the treatment of choice for AMD. And even though the required dosage was even smaller than the equivalent Avastin dose, Genentech priced it at about $2,000.

Genentech, for obvious reasons, was very aggressively not interested in testing Avastin for AMD. But others were, and over the next few years several clinical trials were run. The results were pretty clear: Avastin worked great. Genentech claimed that the clinical trials showed that it was less safe than Lucentis, but virtually nobody bought that. In some of the smaller trials, Avastin showed a slightly higher incidence of adverse effects, but they were things that seemed completely unrelated to the drugs themselves. It was most likely just a statistical artifact. The opinion of the medical community is almost unanimous that Avastin works just as well as Lucentis.

Last year, Medicare’s inspector general released a report on this subject and concluded that the average physician cost for Lucentis ran to about $1,928 vs. $26 per dose of Avastin (including drug and compounding costs). Needless to say, since Medicare is prohibited from negotiating prices or turning down treatments, there was nothing much they could do about this. If Genentech wanted to sell Lucentis for $2,000, it could do it. If doctors wanted to prescribe it, they could. And even though Avastin worked just as well, Medicare couldn’t insist that it be used instead.

You can draw your own conclusions from all this. In one sense, you can sympathize with Genentech: they spent a bunch of money on clinical trials for Lucentis, and they want to see a return on that investment. The fact that AMD requires only a tiny dose doesn’t do anything to lower their research and testing costs. On the other hand, they could have done those trials a whole lot more cheaply using Avastin, but chose not to since that would make it clear that Avastin worked just fine—and Avastin, unfortunately, was already on the market at a price that was very low in the small doses needed for AMD. Likewise, doctors could have rebelled and refused to prescribe Lucentis, which would have benefited their patients since Medicare beneficiaries pay 20 percent of the cost of pharmaceuticals. But why would they? Lucentis is more convenient; doctors don’t bear any of the higher cost themselves; and, in fact, since Medicare reimburses them at cost plus 6 percent, prescribing Lucentis earns them about $100 more per dose than prescribing Avastin.

Quite the pretty picture, isn’t it? And here’s the most ironic part: Avastin continues to be widely used for cancer treatment, where it’s extraordinarily costly and of only modest benefit, but is less widely used for AMD, where it’s quite cheap and works well. This is lovely for Genentech, but not so much for the rest of us. Isn’t American health care great?

UPDATE: In the last paragraph, I said that Avastin “isn’t” used for AMD. That’s not right. In fact, it’s used more often than Lucentis. But as the Post documents, even with a smaller market share, Lucentis accounts for 73 percent of the cost of treating AMD nationwide. I’ve corrected the text.