Republicans have been getting antsier than usual lately over the prospect that voters are starting to think they’re little more than the Party of Mean. The problem is that Republicans remain adamantly opposed to just about every possible program that helps the poor, and after a while that starts to look fairly obnoxious when everyone knows the economy is still weak and there simply aren’t enough jobs available for everybody who wants one. This week, in the latest memo from the GOP high command suggesting that everyone watch their tone in public, Republicans were instructed to at least show a little empathy for the unemployed rather than sneering at them as moochers and looters who just need to get off their butts and go to work.

That’s good advice, but it only goes so far. There’s still the niggling problem that although Republicans like to talk about they do so care about poverty, their actual proposals are pretty thin on the ground. Today, Marco Rubio tried to fix that in a talk held in the LBJ room in the Capitol. After a few shoutouts to marriage, education, tax reform, and liberal 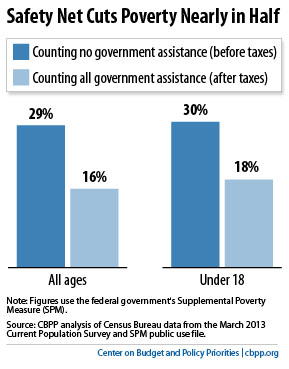 failure (“Raising the minimum wage may poll well, but having a job that pays $10 an hour is not the American Dream”), he got to the point:

Our anti-poverty programs should be replaced with a revenue neutral Flex Fund. We would streamline most of our existing federal anti-poverty funding into one single agency. Then each year, these Flex Funds would be transferred to the states so they can design and fund creative initiatives that address the factors behind inequality of opportunity.

….It’s wrong for Washington to tell Tallahassee what programs are right for the people of Florida — but it’s particularly wrong for it to say that what’s right for Tallahassee is the same thing that’s right for Topeka and Sacramento and Detroit and Manhattan and every other town, city and state in the country.

….We should pursue reforms that encourage and reward work. That’s why I am developing legislation to replace the earned income tax credit with a federal wage enhancement for qualifying low-wage jobs. This would allow an unemployed individual to take a job that pays, say, $18,000 a year — which on its own is not enough to make ends meet — but then receive a federal enhancement to make the job a more enticing alternative to collecting unemployment insurance.

Unlike the earned income tax credit, my proposal would apply the same to singles as it would to married couples and families with children. It would also be a preferable means of distributing benefits since it would arrive in sync with a monthly paycheck rather than a year-end lump-sum credit. And it’s a better way of supporting low-income workers than simply raising the minimum wage.

It’s a shame that Rubio is almost certainly not serious about genuinely fighting poverty. Because these aren’t impossible ideas. The first one is basically the usual conservative dream of block granting everything and then dumping the whole load onto the states, something that liberals are quite reasonably skeptical about. After all, virtually every state controlled by Republicans is currently refusing to expand Medicaid coverage even though it’s nearly 100 percent paid for by the federal government. This gives everyone a pretty good idea of just how eager red states are to help the poor.

And that’s a shame, because Rubio is right when he says that state experimentation, a la welfare reform in the early 90s, could be pretty valuable. If states were truly serious about finding answers, and if each of the various state policies were rigorously studied, it could provide some genuine insights into how best to fight poverty. But what are the odds of that?

The wage subsidy is also a potentially good idea, and I guess we’ll have to wait for the details that Rubio promises to reveal later. Again, though, I’ll be pretty surprised if it doesn’t end up turning into nothing more than an excuse to cut spending on poverty. A wage subsidy that, in aggregate, is as large or larger than the current EITC, might be worth considering. More likely, though it will just be a nothingburger designed to justify opposition to a minimum wage increase.

But we’ll see. I don’t believe for a second that Rubio is serious about this stuff, nor do I believe that his fellow Republicans will show any interest in anything that doesn’t slash spending on the poor. But he can prove me wrong if he wants.