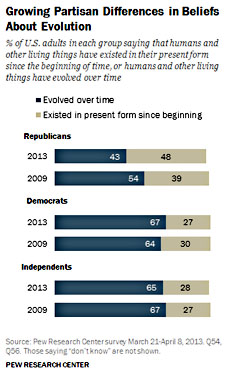 Paul Krugman offers a late comment on a Pew poll released earlier this week showing that Republicans are a lot less likely to believe in evolution than they were five years ago:

Is the theory of evolution somehow related to Obama administration policy? Not that I’m aware of, but that’s not the point. The point, instead, is that Republicans are being driven to identify in all ways with their tribe — and the tribal belief system is dominated by anti-science fundamentalists. For some time now it has been impossible to be a good Republicans while believing in the reality of climate change; now it’s impossible to be a good Republican while believing in evolution.

And of course the same thing is happening in economics….The reemergence of a 30s-type economic situation, with prolonged shortfalls in aggregate demand, low inflation, and zero interest rates should have made many Republicans more Keynesian than before. Instead, at just the moment that demand-side economics became obviously critical, we saw Republicans — the rank and file, of course, but economists as well — declare their fealty to various forms of supply-side economics, whether Austrian or Lafferian or both.

….This has to be about tribalism. All the evidence, from the failure of inflation and interest rates to rise despite huge increases in the monetary base and large deficits, to the clear correlation between austerity and economic downturns, has pointed in a Keynesian direction; but Keynes-hatred (and hatred of other economists whose names begin with K) has become a tribal marker, part of what you have to say to be a good Republican.

This was exactly my reaction to the poll as well, and in a way, it’s why I wasn’t too bothered by it. I don’t think it shows that conservatives are becoming more hostile to science, or even more hostile to evolution. Like so many poll questions these days, it gets interpreted by a lot of people as little more than “Are you a liberal or a conservative?” As Krugman says, between the pollster’s mouth and the respondent’s ears, it morphs into a tribal marker, not an actual question about an actual policy.

So my initial reaction was not to be too bothered about it. Increasing tribalism and polarization are no surprise, after all, and plenty of polls in the past have shown similar tribal dynamics. Republicans think the economy is worse than it is when a Democrat is president, for example, and Democrats think the same when a Republican is president.

But if there’s a reason to take this more seriously than I did initially, it’s the magnitude of the effect. Republican belief in evolution has dropped an astonishing 11 points since 2009. Even if that doesn’t mean very much about evolution per se, it sure suggests that conservative tribalism has increased a helluva lot in the Obama era. I wouldn’t be surprised to learn that tribalism rises and falls over time, with the out party generally becoming more cohesive until they manage to get one of their own guys in the White House, so maybe this is a self-correcting problem over a long enough time frame. But that’s just a guess. I haven’t seen any firm evidence for it. Perhaps some enterprising political scientist at the Monkey Cage can review the evidence about this for us?