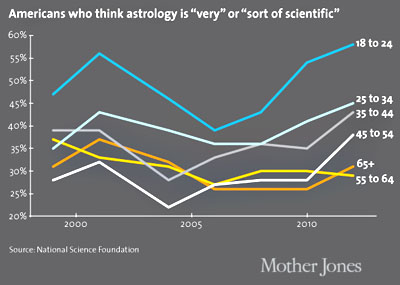 A few days ago, Chris Mooney reported here about a new study showing that belief in astrology is on the rise, especially among the young. What’s up with that? One of Andrew Sullivan’s readers offers a hypothesis:

The National Science Foundation study shows something is clearly shifting within the culture in regards to astrology, particularly for those under 45. What has shifted? It’s that astrology is slowly winning hearts and minds, not through silly horoscopes, but through consistent, effective counseling that clients find useful, practical and relevant to their lives. Professional astrologers cater to working-class individuals all the way up to lawyers, doctors, politicians, businessmen, and professionals of all stripes, every day in this country. Since the field is not routinely covered in the media, many would be surprised to learn that the average professional astrologer is highly educated, socially and politically liberal, and extremely intellectual.

I think you can all guess what I think of this, right? That said, I had an interesting experience many years ago. A friend of mine at work—very smart, very grounded, very educated—was also very deeply into astrology. It was mostly a subject of good-natured banter in the office, and she knew perfectly well that almost none of us were believers. Including me, of course. But then I saw her at work a couple of times, and came to the same conclusion as Sullivan’s emailer.

She was, basically, a good counselor. She was empathetic, a good listener, and provided pretty good advice. It so happened that she used astrology as a way of organizing her thoughts, but as near as I could tell, that was just incidental. She believed it, and it gave her a useful framework to work from, but it didn’t really mean anything beyond that. She would have been a good counselor whether she was reading star charts, reading palms, or reading out of the DSM-5. Astrology gave her confidence, and that in turn gave her clients confidence. Regardless of whether it was true, that fact made it useful.

Now, I have no idea whether this has anything to do with the fact that, since 2005, an increasing number of young people believe astrology has a scientific basis. Probably not. In fact, the whole thing might be statistical noise that will disappear the next time the NSF happens to ask this question. But it’s possible that there’s a virtuous (or vicious) circle here: counselors decide to try out astrology as a way of getting through to people; it turns out that it’s effective at building confidence; so more counselors try it and, thanks to the good counseling, more people believe in it. Rinse and repeat.

This is just a guess, not something to be taken seriously. Other guesses welcome in comments.