Chained CPI is the dog that didn’t bark. President Obama’s latest budget proposal doesn’t include a switch to chained CPI, and this absence has put chained CPI back in the news. Does that make sense?

Probably not. In any case, you probably don’t care much about what chained CPI really is. I’m sure I’ve written up a technical explanation in the past, but I’m too lazy to—oh hell. Hold on. Here it is if you’re interested. Or you can just google it. Long story short, it slightly reduces the way we 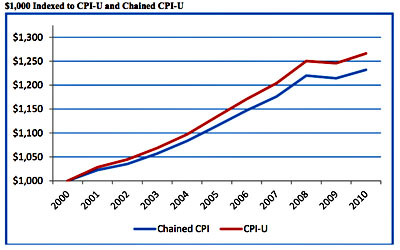 Obama has proposed in the past that we adopt chained CPI. On its own, this is a terrible idea. However, under certain circumstances, it might be a good thing. At a minimum, those circumstances are threefold: (1) There would be some kind of adjustment to prevent low-income retirees from taking a hit. (2) It’s part of some broader deal on Social Security. (3) It’s adopted everywhere, including in the tax code, where it would raise taxes slightly by slowing down the inflation indexing of tax brackets. Hey, if it’s good for the goose, it’s good for the gander. Chained CPI is either more accurate or it’s not, and if it is, then we should use it everywhere.

If these circumstances were met, I’d have a certain amount of sympathy for switching to chained CPI beyond the purely wonkish consensus that it’s a more accurate measure. One reason is that it forces everyone to put their money where their mouths are. And by “everyone” I mean today’s retirees. You see, one of the things that pisses me off about discussions of Social Security is that it’s always future retirees who are supposed to take one for the team. We’re supposed to believe that Social Security is in crisis mode, a true threat to the republic, and therefore we have to cut benefits. But look. If this is really such a huge crisis, then we should all pitch in to save Social Security, including current retirees. If current retirees think their existing benefits are too generous, then they should support cutting them. If they don’t think that, then why should they get to keep their current benefits but cut them for future retirees?

They shouldn’t. Either benefits are too high or they aren’t. And one of the features of chained CPI is that it would have a small but immediate effect on benefits, cutting future COLA increases slightly every year. If that’s acceptable to current retirees, then I figure I can accept a cut too. If not, then I want the same benefits they’re getting. Deal?

In any case, none of this matters, because Republicans have never shown the slightest willingness to cut a broader deal. They want chained CPI, but they want it only for future retirees and they want it only for Social Security. They are willing to make precisely zero concessions in return for this. So as Jonathan Chait points out, it really doesn’t matter if Obama includes chained CPI in his budget proposal:

One thing I’m curious about in an academic sort of way is whether Obama ever really truly supported chained CPI. He’s enough of a wonk that he might have. Or, it might merely have been a bargaining chip that he knew would never go anywhere. We’ll probably never know.