Speaking of Dave Camp’s tax reform plan, it’s out now. It may be DOA, but it’s out. In a nutshell, it reduces rates, reduces the number of tax brackets, and increases both the standard deduction and the child tax credit. As a result, many fewer people would have to file 1040 long forms. To make up for this, Camp proposes limiting or eliminating a raft of deductions and tax breaks. Here’s my favorite:

Boo-yah! That’s the way to play culture war politics in a boring tax reform proposal. There are also references to “Wall Street tycoons”—not a phrase you normally hear from a Republican—and a proposal to end tax breaks that allow university 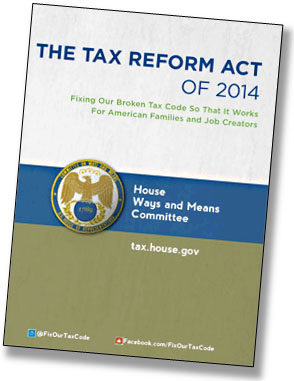 Joking aside, I’ll give Camp credit for going after a long laundry list of very specific deductions. On the other hand, he also appears to finance his plan partly through an effective cut in the Earned Income Tax Credit. I can’t say that for sure without more details, but it sure looks that way on first inspection. The plan also “consolidates” higher education tax breaks, which might be a good idea, though it’s hard to tell without more details. If it’s just an excuse to reduce financial aid, it’s not so good.

There’s also a proposal for a small change to the mortgage interest deduction—a brave act even if it’s fairly paltry—and a proposal to partially end the carried interest loophole. Camp also proposes a 0.035 percent tax on big banks, which is probably a good idea. Camp repeals the AMT, which is a great idea, and funds it by eliminating the tax deduction for state and local taxes. This is a longtime favorite of conservatives because, as Camp says, “This deduction redistributes wealth to big-government, high-tax states from small-government, low-tax states.” In other words, it benefits blue states more than red states, so why not get rid of it?

He also wants to get rid of the NFL’s tax exemption. Sounds good to me.

Camp’s plan is long and includes upwards of a hundred specific tax deductions that he wants to reform or eliminate. There are enough caveats that it’s hard to tell exactly how far his proposals go, but again, kudos to him for making specific proposals at all. His plan may be DOA precisely because he was so specific, but kudos anyway. I’ll be interested in following the reaction as everyone figures out just whose ox would be gored by his various bullet points. Should be fun.