Jonah Goldberg watched the NBC Nightly News last night and was unhappy that they didn’t devote more time to Obama’s delay of the employer mandate. There’s a reason for that, of course: it’s not really very important and most people don’t care about it. Sure, all of us 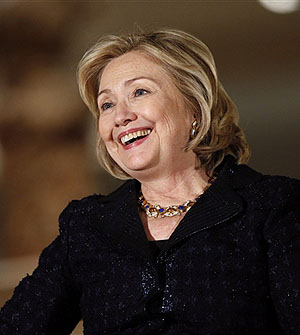 partisan junkies care about it, but that’s about it. To everyone else it’s a minor administrative rule change.

But he was also unhappy with another segment:

The highlight of the night was Andrea Mitchell’s “report” on the Washington Free Beacon’s big take-out on the “Hillary Papers.” Her discomfort was palpable. She assured viewers that the “inflammatory excerpts” weren’t necessarily in context (Mitchell the Chief Foreign Affairs Correspondent for NBC who spent much of the last year covering Sarah Palin is a great stickler for context and eschews anything inflammatory). Hillary Clinton, the front runner for her party’s presidential nomination was treated like the victim. Thank goodness she didn’t joke about putting traffic cones up on the George Washington bridge!

By chance, I happened to see that segment. What struck me was less Andrea Mitchell’s “discomfort” than the fact that this supposed bombshell seemed like a total nothingburger. When it was over, I sort of shrugged and wondered what the point was. Here’s a bit of the transcript from Mitchell’s report about the Diane Blair papers:

Tonight, the once-private papers of the woman Hillary Clinton has previously described as her closest friend are getting a lot of attention….Thanksgiving, 1996, Blair quotes Clinton saying “I’m a proud woman. I’m not stupid. I know I should do more to suck up to the press. I know it confuses people when I change my hairdos. I know I should pretend not to have any opinions, but I am just not going to. I’m used to winning and I intend to win on my own terms.”

….September 9, 1998, Bill Clinton had finally admitted his relationship with Lewinsky. Blair writes of Hillary, “she is not trying to excuse him; it was a huge personal lapse.” But she says to his credit, he tried to break it off, tried to pull away.” Blair did not survive to provide context for her diary. Now Republicans say her notes are fair game.

Um, OK. Is that supposed to be damaging? The entire Beacon story is here, and I guess there are some outtakes that can be spun as unflattering toward Hillary, but that’s about it. It’s a bit of tittle tattle about who Hillary was annoyed with at various points in time, and not much more. And even that depends for its power on just how accurately Blair represented Hillary’s views.

Maybe I’m demonstrating a lack of imagination here, but I’m having a hard time seeing this as especially damaging or bombshellish. For the most part, it strikes me as confirming that Hillary was pretty much who we thought she was: tough-minded, goal-oriented, sometimes defensive, and not always sure how to handle the tsunami of invective that beset the Clinton presidency. If you’re a Hillary hater, it will be yet more evidence that she’s Satan incarnate, but for the rest of us, I’m not sure what’s really new here.