I think the whole thing is not driven by any change in world circumstances, it is driven by budget considerations. He would much rather spend the money on food stamps than he would on a strong military or support for our troops.

This is, as Andrew Sullivan points out, loathsome:

He could have made an argument why he thinks we should maintain the stratospheric levels of defense spending that have been in place since 9/11; he could have argued that the US needs to maintain the ability to fight two major land wars simultaneously in perpetuity. He could have said a lot of things. But he decided to accuse the commander-in-chief of not supporting the troops and actually wanting to keep people in poverty. There is this belief out there that Republican extremism comes from the base and not the elites. But Cheney proves otherwise.

There’s more to this. You might disagree with Obama’s priorities, but Cheney’s claim is based entirely on the notion that Hagel and Obama are proposing military cuts. But they aren’t. Hagel proposed a change in force structure that would lead to a smaller Army, but his overall budget proposal is $115 billion more than the current 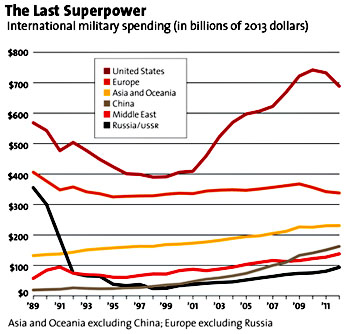 sequester levels demanded by Republicans. Hagel is going to have plenty of fights on his hands, but mainly because he wants more money, not less. James Joyner explains:

Hagel, in a Pentagon speech on Monday, insisted that sequestration levels amounted to “irresponsible cuts” that would “compromise our national security for both the short- and long-term.” While acknowledging that they remain “the law of the land,” the secretary insisted that the only way to implement them “is to sharply reduce spending on readiness and modernization, which would almost certainly result in a hollow force—one that isn’t ready or capable of fulfilling assigned positions.” Hagel terms the administration proposal as “more reasonable and far more responsible” than the current approach.

….Further, the $115 billion figure actually understates the amount by which the proposal exceeds sequestration limits….another Base Realignment and Closure, or BRAC, round in 2017….proposed cut of 20,000 personnel from the Army National Guard by 2019….cancel the Army’s Ground Combat Vehicle program, end future upgrades to F/A-18 Super Hornet fighter and EA-18 Growler electronic warfare aircraft, and halt the buy of the Navy’s Littoral Combat Ship….mothball its entire fleet of A-10 close air support planes….capping pay raises for troops at 1 percent (while freezing pay for general officers).

….At the same time, slashing the Army to its smallest size since before World War II, which essentially guarantees that the United States could not take on two simultaneous major conflicts, is likely to be accomplished without much resistance.

In other words, Hagel is going to run into a buzzsaw because (a) he wants a bigger budget and (b) he wants to cut a bunch of wasteful spending that’s near and dear to every congressman whose district might be affected. Cutting the size of the Army is just one small part of the whole package.

Naturally this is the part that Fox News focuses on and that Dick Cheney demagogues. But keep one thing firmly in mind: Even though it’s declined from its Iraq/Afghanistan peak, our military budget is still far larger than it was in 2000. Congress has made it clear that it wants further cuts, and in this case at least, Obama and Hagel are the ones fighting against the cuts. In his current proposal, Obama is asking for more money than current sequestration levels. He’s not cutting the military. Compared to what Congress asked for, he’s expanding it.