Judge Lynn Adelman, a federal district judge in Wisconsin, struck down that state’s voter ID law today. This was despite the Supreme Court’s 2008 decision in Crawford v. Marion County that Indiana’s voter ID law was justified. So what was different this time?

In a word, better arguments from one side. In Crawford, the state presented virtually no evidence that in-person voter fraud was a problem in Indiana—but neither did the plaintiffs provide much evidence that a voter ID law presented a serious obstacle to voting. Given this, the state’s interest in preventing voter fraud—even if that interest was more speculative than real—carried the day.

This time, the state once again produced virtually no evidence that in-person voter fraud was even a potential problem. But the judge was presented with loads of evidence that the burden of obtaining a photo ID was, in fact, quite high for low-income voters in particular. Since Crawford mandated the use of a balancing test to assess whether a photo ID law was justified, that made the difference and Wisconsin’s law was struck down.

The full opinion is here. Below are a few excerpts that explain Adelman’s reasoning. It’s worth a read because I wouldn’t be surprised if another photo ID case makes it to the Supreme Court sometime in the next few years. If it does, better 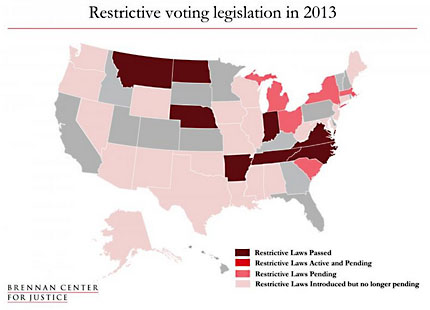 arguments about the burden imposed by ID laws will be key to any reconsideration of Crawford.

Is there any serious evidence of in-person voting fraud that could be prevented by a photo ID law?

The evidence at trial established that virtually no voter impersonation occurs in Wisconsin. The defendants could not point to a single instance of known voter impersonation occurring in Wisconsin at any time in the recent past. The only evidence even relating to voter impersonation that the defendants introduced was the testimony of Bruce Landgraf, an Assistant District Attorney in Milwaukee County….The most Landgraf’s testimony shows is that cases of potential voter-impersonation fraud occur so infrequently that no rational person familiar with the relevant facts could be concerned about them. There are over 660,000 eligible voters in Milwaukee County, and if the District Attorney’s office finds two unexplained cases each major election, that means that there is less than one questionable vote cast each major election per 330,000 eligible voters. The rate of potential voter-impersonation fraud is thus exceedingly tiny.

How heavy a burden is it to obtain a state-issued photo ID?

In light of the fact that a substantial number of the 300,000 plus voters who lack an ID are low income, Act 23’s burdens must be assessed with reference to them rather than with reference to a typical middle- or upper-class voter….For almost all low-income voters who lack an ID, the easiest ID to obtain will be the free state ID card, which is issued by the DMV….To prove name, date of birth and United States citizenship, most people will need to produce a birth certificate. The evidence at trial showed that a substantial number of eligible voters who lack Act 23-qualifying IDs also lack birth certificates.

….Assuming the person is able to determine what he or she needs to do to obtain an ID, the person must next consider the time and effort involved in actually obtaining the ID. This will involve at least one trip to the DMV. There are 92 DMV service centers in the state. All but two of these close before 5:00 p.m. and only one is open on weekends. So, it is likely that the person will have to take time off from work. The person will either need to use vacation time if it’s available or forego the hourly wages that he or she could have earned in the time it takes to obtain the ID….The person will also have to arrange for transportation.

….A person who needs to obtain a missing underlying document is also likely to have to pay a fee for the document. For some low-income individuals, it will be difficult to pay even $20.00 for a birth certificate.

….Given the obstacles identified above, it is likely that a substantial number of the 300,000 plus voters who lack a qualifying ID will be deterred from voting. Although not every voter will face all of these obstacles, many voters will face some of them, particularly those who are low income….In light of the evidence presented at trial, it is also clear that for many voters, especially those who are low income, the burdens associated with obtaining an ID will be anything but minor. Therefore, I conclude that Act 23 will deter a substantial number of eligible voters from casting a ballot.

How does the burden of obtaining ID balance against the state interest in preventing voter fraud?

There is no way to determine exactly how many people Act 23 will prevent or deter from voting without considering the individual circumstances of each of the 300,000 plus citizens who lack an ID. But no matter how imprecise my estimate may be, it is absolutely clear that Act 23 will prevent more legitimate votes from being cast than fraudulent votes….Thus, Act 23’s burdens are not justified by the state’s interest in detecting and preventing in-person voter impersonation. Moreover, because the state’s interest in safeguarding confidence in the electoral process is evenly distributed across both sides of the balance—a law such as Act 23 undermines confidence in the electoral process as much as it promotes it—that interest cannot provide a sufficient justification for the burdens placed on the right to vote.