Last night I found myself idly wondering what the deal was with that iPhone ad featuring a song about chicken fat. In our glorious modern era, of course, even the idlest curiosity can be satisfied in a few seconds, so after the Miami Heat had slunk back to their locker room I came out and googled it. It turns out that I’m just barely too young to remember its origins. It was written by Meredith Willson (of Music Man fame) as part of John F. Kennedy’s physical fitness program in the early 60s and performed by Robert Preston. The idea was to send recordings to schools across the country, where it could be played for our nation’s youth in an effort to get them to shape up.

So that’s that. But in my googling I came across a few other comments about the revival of this song. I wanted to share this one from Danger Guerrero:

Okay, so there are two things going on here. The first thing is that Apple is promoting the fitness-assisting capabilities of its fancy new product by using a quirky, notable fitness-related song from over 50 years ago.

….The second and much more important thing is that apparently John F. Kennedy commissioned the creator of The Music Man to write a song that would inspire pudgy children to do push-ups, and that guy went back to Kennedy at some point after that with a song riddled with lyrics like “Nuts to the flabby guys! Go, you chicken fat, go away!,” to which Kennedy replied, presumably, “Perfect. Ship it to every school in America.” This is incredible. And can you even imagine the left-right poo-flinging that would take place on cable news if this happened today? It would be chaos. Hannity’s head might literally explode on-camera. I vote we try it.

So now you’re probably wondering what this has to do with Friday Catblogging. Nothing, really. I suppose I could make up some connection, but there isn’t one. I just felt like mentioning it. But now your patience is rewarded. Today you get to see what greets me every time I get out of the shower in the morning. A cat. Just sitting there waiting for me in the most inconvenient possible spot, so I have nowhere to step out. In other words, typical feline behavior. She seems very pleased with herself, and I think she was especially pleased today when she forced me to step over a black cat on Friday the 13th. Apparently no one has told her that if I get hit by a meteor, the cat food gravy train dries up. 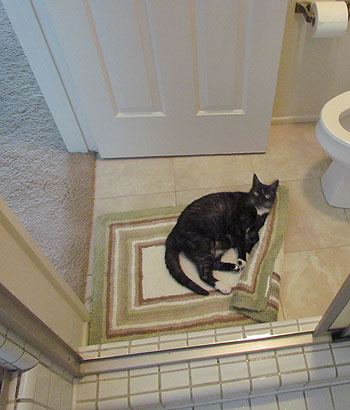