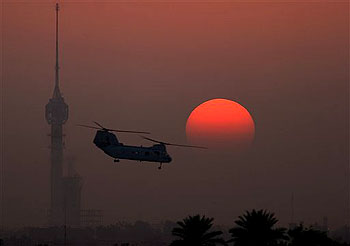 I’ve been meaning to make note of something about Iraq for a while, and a story today in the LA Times provides the perfect hook:

A group of U.S. diplomats arrived in Libya three years ago to a memorable reception: a throng of cheering men and women who pressed in on the startled group “just to touch us and thank us,” recalled Susan Rice, President Obama’s national security advisor….But in three years Libya has turned into the kind of place U.S. officials most fear: a lawless land that attracts terrorists, pumps out illegal arms and drugs and destabilizes its neighbors.

….Now, as Obama considers a limited military intervention in Iraq, the Libya experience is seen by many as a cautionary tale of the unintended damage big powers can inflict when they aim for a limited involvement in an unpredictable conflict….Though they succeeded in their military effort, the United States and its North Atlantic Treaty Organization allies fell short in the broader goal of putting Libya on a path toward democracy and stability. Exhausted after a decade of war and mindful of the failures in Iraq, U.S. officials didn’t want to embark on another nation-building effort in an oil-rich country that seemed to pose no threat to Western security.

But by limiting efforts to help the new Libyan government gain control over the country, critics say, the U.S. and its allies have inadvertently helped turn Libya into a higher security threat than it was before the military intervention.

The view of the critics in this piece is pretty predictable: no matter what happens in the world, their answer is “more.” And whenever military intervention fails, it’s always because we didn’t do enough.

But I don’t think Obama believes this anymore. He mounted a surge in Afghanistan, and it’s pretty plain that it’s accomplished very little in the way of prompting reconciliation with the Taliban or setting the stage for genuine peace. Even lasting stability seems unlikely at this point. That experience made him reluctant to intervene in Libya, but he eventually got talked into it and within a couple of years that turned to shit too. Next up was Syria, and this time his reluctance was much more acute. There would be some minor steps to arm the anti-Assad rebels, but that was it. There was a brief moment when he considered upping our involvement over Syria’s use of chemical weapons, but then he backed off via the expedient of asking for congressional approval. Congress, as Obama probably suspected from the start, was unwilling to do more than whine. When it came time to actually voting for the kind of action they kept demanding, they refused.

By now, I suspect that Obama’s reluctance to support military intervention overseas is bone deep. The saber rattlers and jingoists will never change, but he never really cared about them. More recently, though, I think he’s had the same epiphany that JFK had at one time: the mainstream national security establishment—in the Pentagon, in Congress, in the CIA, and in the think tanks—simply can’t be trusted. Their words are more measured, but in the end they aren’t much different from the perma-hawks. They always want more, and deep in their hearts the only thing they really respect is military force. In the end, they’ll always push for it, and they’ll always insist that this time it will work.

But I don’t think Obama believes that anymore, and I think he’s far more willing to stand up to establishment pressure these days. This is why I’m not too worried about the 300 advisors he’s sent to Iraq. A few years ago, this might very well have been the start of a Vietnam-like slippery slope into a serious recommitment of forces. Today, I doubt it. Obama will provide some limited support, but he simply won’t be badgered into doing more. Deep in his heart, he now understands that Iraq’s problem is fundamentally political. Until there’s some chance of forging a genuine political consensus, American troops just can’t accomplish much.