I’ve been reading the Supreme Court’s opinion in the Aereo case, and it’s kind of fascinating. As you may know, Aereo is a company that installs thousands of tiny antennnas in a warehouse and then lets users “rent” one of the antennas, 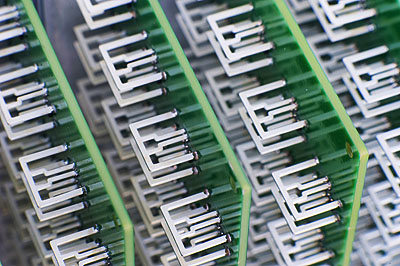 as well as some storage space. Users connect to their antenna via the internet, and can either watch broadcast TV in real time or set up times for shows to be recorded.

Broadcast networks claim that Aereo is retransmitting their content to the public, which is a violation of copyright law. Aereo, naturally, disagrees. The court’s decision appears to hinge on a single key question: can Aereo be said to be an active infringer when it’s merely a passive conduit for users, who are the ones who choose what to watch and record?

The majority said yes, because Aereo is essentially just like a cable TV operator, and the Copyright Act of 1976 specifically says that cable TV operators are retransmitting content. Antonin Scalia, writing in dissent, calls this specious:

The Court’s reasoning fails on its own terms because there are material differences between the cable systems at issue in [Teleprompter and other decisions] on the one hand and Aereo on the other. The former (which were then known as community-antenna television systems) captured the full range of broadcast signals and forwarded them to all subscribers at all times, whereas Aereo transmits only specific programs selected by the user, at specific times selected by the user. The Court acknowledges this distinction but blithely concludes that it “does not make a critical difference.”

….Even if that were true, the Court fails to account for other salient differences between the two technologies….At the time of our Teleprompter decision, cable companies “perform[ed] the same functions as ‘broadcasters’ by deliberately selecting and importing distant signals, originating programs, [and] selling commercials,”, thus making them curators of content—more akin to video-on-demand services than copy shops. So far as the record reveals, Aereo does none of those things.

The key distinction here is that Aereo doesn’t actively “curate” its content or retransmit everything at all times. It just makes everything available and users then choose what to watch. “Some of those broadcasts are copyrighted; others are in the public domain. The key point is that subscribers call all the shots.”

I can’t say that I find this very persuasive. For one thing, cable operators don’t forward everything to all subscribers at all times. You have to turn on your cable box and then set your tuner to pick up a particular station. More substantively, I suppose it’s true that there are bits and pieces of broadcast television that are in the public domain, but come on. Virtually everything Aereo makes available is copyrighted material and they know it. Scalia says Aereo is a lot like a copy shop, which isn’t held liable for the occasional customer who infringes copyright because, in practice, most of their customers aren’t infringing. But if a shop ran a service where they copied entire books from their library, they’d be held liable—even if a few of their books were in the public domain and even if their users had to physically press a button to start up the copying process.

In any case, as near as I can tell this case is based almost entirely on extremely fine points like this. Is Aereo essentially the same as a cable TV operator, and thus something that Congress intended to regulate in the Copyright Act of 1976? Can Aereo be held liable for infringement even though it’s users who make the decisions about what to watch and what to record? Are Aereo’s transmissions “public” even though each individual antenna is rented out to only a single individual person?

I could have seen this case going either way, but in the end the majority decided the case based on their conclusions about (a) the intent of Congress and (b) whether Aereo is so similar to a cable TV operator that it falls under the same laws. In the end, they decided that if it looks like a duck and quacks like a duck, it’s a duck. And Aereo lost.