CBPP has posted a series of charts showing the effects of welfare reform on the poor over the past couple of decades. In its first few years it seemed like a great success: welfare rolls went down substantially in the late 90s while the number of 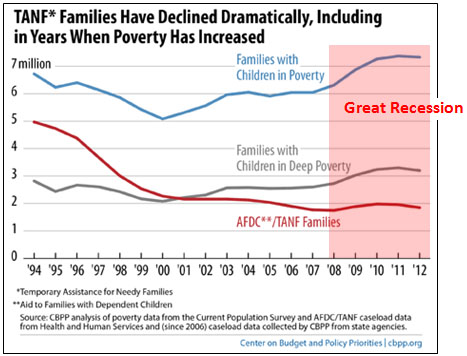 poor people with jobs went up. But the late 90s were a boom time, and this probably would have happened anyway. Welfare reform may have provided an extra push, but it was a bubbly economy that made the biggest difference.

So how would welfare reform fare when it got hit with a real test? Answer: not so well. I added some red recession shading to the CBPP chart on the right, and as you can see, the Great Recession created an extra 1.5 million families with children in poverty. TANF, however, barely responded at all. There was no room in strapped state budgets for more TANF funds:

The TANF block grant fundamentally altered both the structure and the allowable uses of federal and state dollars previously spent on AFDC and related programs. Under TANF, the federal government gives states a fixed block grant totaling $16.5 billion each year….Because the block grant has never been increased or adjusted for inflation, states received 32 percent less in real (inflation-adjusted) dollars in 2014 than they did in 1997.  State minimum-required contributions to TANF have declined even more. To receive their full TANF block grant, states only have to spend on TANF purposes 80 percent of the amount they spent on AFDC and related programs in 1995. That “maintenance of effort” requirement isn’t adjusted for inflation, either.

Welfare reform isn’t a subject I know a lot about. I didn’t follow it during the 90s, and I haven’t seriously studied it since then. With that caveat understood, I’d say that some of the changes it made strike me as reasonable. However, its single biggest change was to transform welfare from an entitlement to a block grant. What happened next was entirely predictable: the size of the block grant was never changed, which means we basically allowed inflation to erode it over time. It also made it impossible for TANF to respond to cyclical economic booms and busts.

Make no mistake: this is why conservatives are so enamored of block grants. It’s not because they truly believe that states are better able to manage programs for the poor than the federal government. That’s frankly laughable. The reason they like block grants is because they know perfectly well that they’ll erode over time. That’s how you eventually drown the federal government in a bathtub.

If Paul Ryan ever seriously proposes—and wins Republican support for—a welfare reform plan that includes block grants which (a) grow with inflation and (b) adjust automatically when recessions hit, I’ll pay attention. Until then, they’re just a Trojan Horse for slowly but steadily eliminating federal programs that help the poor. After all, those tax cuts for the rich won’t fund themselves, will they?