I’m not a diehard supporter of Barack Obama’s foreign policy. Some of his actions I just plain disagree with: the surge in Afghanistan, the enormous increase in drone use, his almost inhuman patience in putting up with Bibi Netanyahu’s nearly open contempt for him. Then there are other actions of his that were arguably justifiable but have worked out less well than he hoped. However, 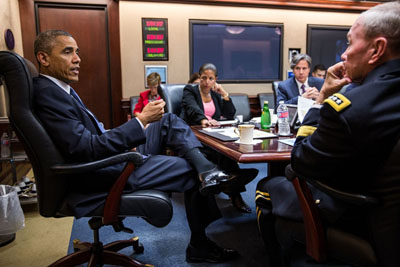 they mostly represent very, very tough problems. And foreign policy is hard—especially now. Almost nobody gets even a small fraction of what they want out of it.

That said, the relentless criticism of Obama’s approach toward ISIS strikes me as unusually shortsighted. As near as I can tell, he’s handled it almost perfectly so far. If we had offered air support to destroy ISIS six months or a year ago, it probably would have made things worse. Iraq flatly wasn’t able to provide the ground troops to complement an air campaign, and America would have shared in the inevitable fiasco. We also would have been explicitly bound to Nouri al-Maliki and his policies, which were the very ones responsible for the rise of ISIS in the first place. The outcome of all this would have been the worst of all possible worlds for American interests.

Instead, Obama allowed Maliki to fail on his own, and then used the leverage of promised American air assistance to engineer his ouster. Needless to say, this hardly guarantees eventual success against ISIS, but is there really any question that it was a necessary precondition for success? I don’t think so. Maliki never would have left unless he was forced out, and it was plain that his brutally sectarian governing style was fueling the insurgency, not halting it. He had to leave.

The alternative to Obama’s strategy wasn’t more aggressive action. That would have been disastrous. Nor would it have made a difference if Obama had left a few troops in Iraq back in 2009. Nor would stronger intervention in Syria have made a difference. It might even have made things worse. The truth is simpler. There’s no single reason for the rise of ISIS, but there is a single primary reason: Nouri al-Maliki. Obama saw that clearly and kept his eye on what was important, working patiently and cold-bloodedly toward engineering Maliki’s departure. It was hardly a perfect plan, and messiness was always inevitable. Nonetheless, it was the best plan available. Because of it, there’s now at least a chance of defeating ISIS.

UPDATE: Does “masterly” go too far? Maybe so. But I was trying to attract attention to my main point: the ISIS threat couldn’t even be addressed until Iraq’s political dysfunction was addressed first. Unlike a lot of people, Obama recognized that and stuck to a toughminded approach that focused on getting rid of Maliki instead of getting distracted by endless calls for a stronger intervention before Maliki was gone. It wasn’t easy, but it was the smart thing to do.

Can the new government fight ISIS more effectively? There’s no way of knowing yet. But at least they’ve been given a chance.