Christopher Paul and Colin Clarke studied 71 insurgencies during the post-WWII period and concluded that every successful counterinsurgency has shared several characteristics. They apply the 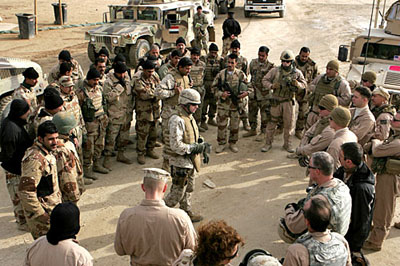 results of their research to the problem of the ISIS insurgency in Iraq:

First, we found that in every case where they succeeded, counterinsurgent forces managed to substantially overmatch the insurgents and force them to fight as guerrillas before getting down to the activities traditionally associated with counterinsurgency….U.S. air power could make a significant contribution toward that end. Airstrikes will help curb Islamic State advances in strategically important parts of Iraq and thus, help bolster the Iraqi government and security forces, at least in the short term.

Second, we concluded from the research that “effective COIN practices tend to run in packs”….Qualitative Comparative Analysis (QCA) techniques identified three COIN concepts critical to success. These three concepts were implemented in each and every COIN win, and no COIN loss implemented all three: Tangible support reduction; commitment and motivation; and flexibility and adaptability.

….U.S. support to an Iraqi counterinsurgency strategy to defeat the Islamic State must focus on reducing tangible support to the insurgents, increasing the commitment and motivation of the Iraqi military and security forces and increasing the government’s legitimacy among Iraqi Sunnis.

It’s been a long time since I spent much time reading about COIN and COIN strategies, but this basically sounds right to me. And it should send a shiver down the spine of anyone who thinks the US should get deeply involved in fighting ISIS.

Here’s why. One of the key factors that I remember identifying during the height of the Iraq insurgency was local commitment. In a nutshell, it turns out that virtually no postwar COIN effort led by a big Western country has been successful. Western help is OK, but the COIN effort has to be led by the local regime. It’s not a sufficient condition for success, but it’s a necessary one.

Paul and Clarke are basically confirming this. Sure, American air strikes might help in terms of the sheer firepower needed to successfully fight ISIS. But of the other three key COIN practices, two are purely local and the third is mostly local. There’s very little the United States can do to help out on these fronts. Only the Iraqi government can increase its legitimacy among the Sunni minority, and only the Iraqi government can properly motivate its military. (The US can provide training and materiel, but it can’t provide commitment and motivation.) Even the problem of reducing tangible support for the ISIS insurgents is mostly something only the Iraqi government can do. The US can help, but only if Iraqis are leading the way.

At the moment, there’s little evidence that the Iraqi government is capable of doing any of these three things. The new government of Haider Al-Abadi might be able to make progress on these fronts, but it hasn’t demonstrated that yet. Until it does, more US help is almost certainly doomed to failure.

Instinctive hawks should think long and hard about this. The record of the United States in counterinsurgencies is dismal. If the conditions are just right, we might be able to do some good in Iraq. At the moment, though, the conditions are appalling. We can put a few fingers in some dikes, but unless and until the Iraqi government steps up to the plate, there’s virtually no chance that deeper US involvement will turn out well.