Jacob Weisberg is critical of Rick Perlstein’s The Invisible Bridge, the third volume in his history of movement conservatism from 1958 to 1980. The first two books covered Barry Goldwater and Richard Nixon; the third spans the period from 1972 through 1976, which encompasses the end of Nixon and the rise of Reagan. Here’s Weisberg:

Most historians view the Nixon-Reagan transition as a break in the ideological continuum, a shift from an era in which Republicans made peace with the growing welfare and regulatory state to one in which a newly energized conservative movement effectively challenged 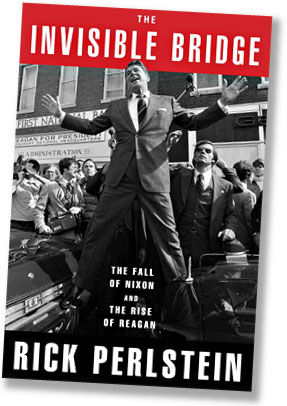 it. Perlstein, by contrast, sees the move from Nixon to Reagan as continuity: Both men tried to reverse what the 1960s were doing to the country.

….An alternative thesis is the one Perlstein seemed to be framing up with his first, shorter, and better book: that the crucial bridge in modern Republican politics was the one leading from Barry Goldwater to Reagan. Nixon was the last important President of the New Deal Era, in the same way that Bill Clinton is best subsumed under the rubric of the Reagan Era….In his attack on government, Reagan drew very little from Nixon, and a great deal from Goldwater….Reagan’s views were not simply Goldwater’s views; they were Goldwater’s views purged of their excesses and abstraction, grounded in the country’s lived experience, and given a hopeful cast. That’s the bridge Reagan walked across and the one I wish Perlstein had tried to sell us.

I think Weisberg has missed the bridge that Perlstein is trying to sell us. Reagan wasn’t merely a better, more congenial version of Barry Goldwater. That’s part of the story, but there’s a second part as well: Reagan’s exploitation of the politics of resentment that Nixon rode to victory in 1968 and 1972. Just as Reagan sanded off the scariest edges of Goldwaterism to make it more palatable to a national audience, he also sanded off—or perhaps just kept hidden—the scariest edges of right-wing populist resentment. But make no mistake: it was there, and it was a big part of Reagan’s appeal. Intellectually, Reagan’s politics may have been the child of Goldwater, but emotionally they were the child of Nixon.

That said, I think Weisberg also makes some sharp criticisms of The Invisible Bridge. I enjoyed it, but it rings true when he complains that “for long stretches, reading this book feels like leafing through a lot of old newspapers.” It’s a little more of a pastiche than either of his first two books, and too often this is to the detriment of the bigger story.

But there was another, more fundamental, disappointment. The genius of Before the Storm, the first book in the series, is that it explained the birth of movement conservatism to a liberal audience. This is harder than it sounds. A conservative history, simply because of the unspoken assumptions that would inevitably color it, would largely leave liberal readers cold. An overtly liberal history, by contrast, would almost certainly be unable to truly explain the appeal of Goldwater and his supporters. But Perlstein threads this needle brilliantly. Before the Storm explains the rise of Goldwater in a way that conservatives consider fair but that liberals find comprehensible.

For better or worse, Perlstein abandoned this approach in The Invisible Bridge. Maybe that was inevitable as the spotlight moved first from a principled loser like Goldwater to a destructive manipulator like Nixon and then to a man who set back the liberal project in a way that’s still painful to this day. It’s just plain easier to be dispassionately curious about Goldwater than about either Nixon or Reagan. Nonetheless, this failing also makes The Invisible Bridge less interesting. Even granting the hagiographic glow that conservatives tend to demand of Reagan biographers, this really isn’t a book that very many conservatives would consider fair. And except for brief flashes of insight1 it doesn’t truly explain to liberal sensibilities just what was so appealing about the man.

It’s still a lovely book that I paged through hungrily. And let’s face it: saying that it’s not as good as Before the Storm is something you could say about nearly every book ever written. It’s still pretty damn good. But I wish Perlstein had gone a little lighter on his obvious contempt for Reagan and spent a little more time owning up—perhaps uncomfortably—to just what it was about the liberalism of the 70s that finally drove so many voters crazy.

1For example, there’s this brief bit about the White House consulting Reagan during the 1973 Arab-Israeli war:

Kissinger [] solicited him for advice on the extraordinarily delicate matter of how to frame an Israeli resupply operation that, if handled incorrectly, could lead to a military confrontation with the Soviet Union. Reagan suggested: “Why don’t you say you will replace all the aircraft the Arabs claim they have shot down?”

This was brilliant. Since the Arabs were wildly exaggerating their success, presenting them with a Hobson’s choice—saying nothing or facing international humiliation—was perfect. Reagan’s interpersonal intelligence was something to behold.