Jonathan Cohn points us to the latest Kaiser/HRET survey of employer health plans and passes along some good news:

That’s a lot of money, obviously. But the cost of the family policy is only 3 percent higher than it was last year, and the cost of the single policy rose by even less….What to think about this? Generally speaking, it’s a positive development when premiums aren’t rising too quickly, since it means that workers have more money in their paychecks.

….Critics of the Affordable Care Act insisted it would cause employers to jack up premiums. There’s no evidence of that happening. And of course this data is consistent with all the other recent data we’ve gotten on health care spending under Obamacare. National health care 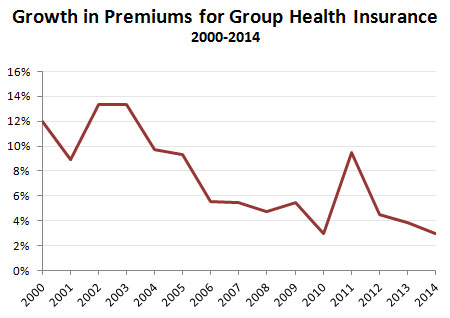 spending, the amount of money we spend as a country, is rising at historically low rates.

I’d place a fair amount of emphasis on that last point. The chart on the right shows the annual increase in premiums for family coverage since 2000. As you can see, premium increases have been falling pretty steadily during the entire period. In the early aughts, employers were routinely seeing double-digit increases. But in the past few years, that’s dropped to around 3-4 percent, which is only slightly higher than the general rate of inflation.

This is all consistent with other data on health care inflation rates, which shows a fluctuating but steady decrease since the early 80s and an even more concrete decrease over the past decade. Obviously this trend has nothing to do with Obamacare, which is benefiting from a bit of a tailwind here.

At the same time, Cohn is right to point out that Obamacare critics all insisted that it would cause premiums to skyrocket. It didn’t. Some premiums went up thanks to new minimum requirements for coverage and the start of community rating, which requires insurance companies to cover everyone, even those with preexisting conditions. But that mostly affected the individual market, and even there premium increases have been pretty manageable for the vast majority of people.

How long will this slowdown in health care inflation last? My guess is that it’s more or less permanent. It will vary a bit from year to year, and I wouldn’t be surprised to see it hit 3-4 points above the general inflation rate in some years. But the downward trend has been in place for three decades now, and that’s long enough to suggest that it was the double-digit increases of the 80s and early 90s that were the outliers. Aside from those spikes, the current smaller increases are roughly similar to health care spending increases over the past half century.