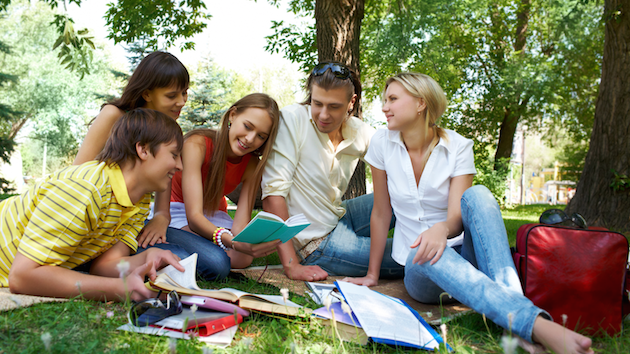 When I write about American education, the background implication is usually simple: kids these days are dumber than they used to be. Schools are bad; the children are slackers; and the Chinese are going to destroy us. Frankly, I doubt this. It may be true that most 17-year-olds can’t locate France on a map, but I’ll bet most adults can’t either. They just never get tested to find out.

The Boston Review ran a fascinating blog post on this theme a few days ago. It seems that one of the pieces of evidence on the side of the doomsayers is the declining vocabularies of our youth. This has been measured regularly since 1974 by the General Social Survey, and it turns out that scores on its multiple-choice Wordsum vocabulary test rose steadily for generations born between 1900 and 1950 but declined after that.

It’s easy to understand why test scores rose for generations born between 1900 and 1950: schooling became far more widespread during the first half of the 20th century. But why did it decline after that? Is it because kids born after 1950 have gotten successively dumber? Claude Fischer summarizes some new research that takes advantage of Google’s Ngram viewer to measure how frequently words have been used over the past century:

[The researchers] took the ten test words—most of which became relatively less common over the century—and also the words that appeared in the answers respondents were given to choose from….Each of over 20,000 respondents in the cumulative GSS survey, 1974 to 2012, got a score for how common the words were in the years between the respondent’s birth and the year he or she turned fifteen.

Dorius and colleagues found that, other things being equal, the rise in test scores from the earliest cohorts to the mid-century cohorts is largely explained by the schooling those cohorts got. And importantly, the decline in test scores from the latter cohorts to the latest ones can be explained by the declining use of certain words, especially “advanced” ones. Once both factors are taken into account, there is little difference among generations in vocabulary scores.

In other words, it’s not that kids have gotten dumber. It’s just that GSS has been using the same words for 40 years, and these words have become less common. The words themselves are kept secret, but apparently they aren’t too hard to suss out. In case you’re curious, here they 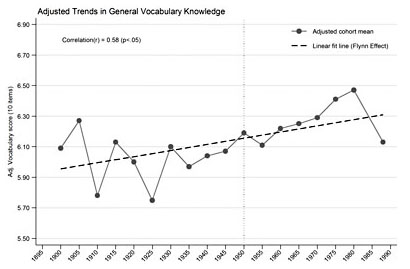 It turns out that once you adjust for how common these words have been at various points in time, the apparent drop in vocabulary scores vanishes. In fact, vocabulary scores have actually gotten higher, as the chart on the right shows. This is hardly the last word on the subject, which appears to be the topic of a vast literature, but it does go to show how careful you have to be with this kind of stuff. It’s safe to say that kids these days are less knowledgeable than their parents about some things. But it’s also true that they’re more knowledgeable about certain other things. This should probably even out, but it doesn’t. It’s adults who get to form judgments about which things matter, and they naturally assume that their knowledge is important, while all the stuff the kids know that they don’t is trivial and ephemeral.

That’s comforting to the oldsters, but not necessarily true. Kids probably don’t know less than their parents. They just know different things.