Over at Vox, Libby Nelson interviews Jack Schneider, an education professor at College of the Holy Cross, about why Americans think schools are in decline despite the evidence that they’re actually better than they used to be. Here’s Schneider:

The first reason that people think schools are in decline is because they hear it all the time. If you hear something often enough, it becomes received wisdom, even if you can’t identify the source. That rhetoric is coming from a policy machine where savvy policy leaders have figured out that the way that you get momentum is to scare the hell out of people. So reformers have gotten really good at this sky is falling rhetoric….The rhetoric there is the schools are in crisis, we are competing against nations that are going to somehow destroy us if our test scores aren’t high enough, and lo and behold, policymakers have a solution.

Schneider points to a couple of pieces of evidence to back up his contention that schools today are better than in the past. The first is NAEP test scores, which have been generally rising, not falling, over the past few decades. The second is the well-known fact that people tend to think their own neighborhood schools are fine but that schools nationally are terrible. A Gallup/PDK poll confirms this perception gap.

But here’s an interesting thing. Although it’s true that this gap in perceptions is widespread, it’s far more widespread among Republicans than Democrats. Take a look at the chart on the right, constructed from the poll numbers. When it comes to rating local schools, 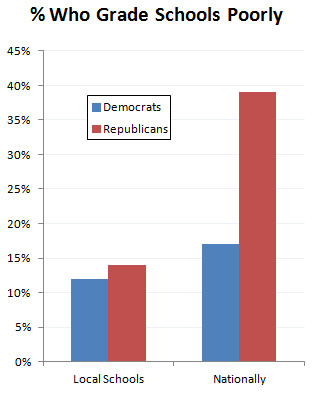 there’s barely any difference between Democrats and Republicans. Only a small number give their local schools a poor grade. But nationally it’s a whole different story. Republicans are far more likely to rate schools as disaster areas nationally.

I’m reluctant to draw too many conclusions about this without giving it some serious thought. Still, there’s at least one thing we can say. This difference doesn’t seem to arise from different personal perceptions of education. Both groups have similar perceptions of their own schools.1 So why are Republicans so much more likely to think that other schools are terrible? If it doesn’t come from personal experience, then the most likely culprit is the media, which suggests that conservative media does far more scaremongering about education than liberal or mainstream media. That’s pretty unsettling given the fact that, as near as I can tell, the mainstream media is almost unrelentingly hostile toward education.

But the truth is that I don’t watch enough Fox or listen to enough Limbaugh to really know how they treat education. Is this where the partisan divide comes from? Or is it from the Christian Right newsletter circuit? Or the home school lobby? Or what?

In any case, there’s more interesting stuff at the link, and Neerav Kingsland has a response here, including the basic NAEP data that shows steadily positive trends in American education since 1971.

1Or so it seems. One other possibility is that far more Republicans than Democrats send their kids to private schools. They rate these schools highly when Gallup asks, but rate other schools poorly because those are the schools they pulled their kids out of. A more detailed dive into the poll numbers might shed some light on this.