Today the Washington Post summarizes a new book by Leon Panetta, former CIA director and secretary of defense in the Obama administration, as well as an interview Panetta gave to Susan Page of USA Today:

By not pressing the Iraqi government to leave more U.S. troops in the country, he “created a vacuum in terms of the ability of that country to better protect itself, and it’s out of that vacuum that ISIS began to breed,” Panetta told USA Today, referring to the group also known as the Islamic State.

….The USA Today interview was the first of what inevitably will be a series as he promotes his book, “Worthy Fights: A Memoir of Leadership in War and Peace,” which is sharply critical of Obama’s handling of the troop withdrawal from Iraq, Syria and the advance 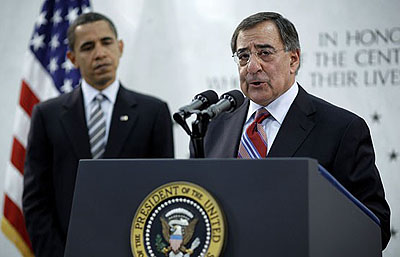 of the Islamic State. “I think we’re looking at kind of a 30-year war” that will also sweep in conflicts in Nigeria, Somalia, Yemen and Libya, he told the paper.

My first thought when I read this was puzzlement: Just what does Panetta think those US troops would have accomplished if they’d stayed in Iraq? Nobody ever seems to have a very concrete idea on that score. There’s always just a bit of vague hand waving about how of course they would have done….something….something….something…..and stopped the spread of ISIS. But what?

My second thought was the same as Joe Biden’s: would it kill guys like Panetta to at least wait until Obama is out of office before airing all their complaints? Do they have even a smidgen of loyalty to their ex-boss? But I suppose that ship sailed long ago, so there’s not much point in griping about it.

In the end, what really gets me is this, where Panetta talks about Obama’s foreign policy legacy:

“We are at a point where I think the jury is still out,” Panetta says. “For the first four years, and the time I spent there, I thought he was a strong leader on security issues. … But these last two years I think he kind of lost his way. You know, it’s been a mixed message, a little ambivalence in trying to approach these issues and try to clarify what the role of this country is all about.

“He may have found himself again with regards to this ISIS crisis. I hope that’s the case. And if he’s willing to roll up his sleeves and engage with Congress in taking on some of these other issues, as I said I think he can establish a very strong legacy as president. I think these next 2 1/2 years will tell us an awful lot about what history has to say about the Obama administration.”

Think about this. Panetta isn’t even a super hawkish Democrat. Just moderately hawkish. But his basic worldview is simple: as long as Obama is launching lots of drone attacks and surging lots of troops and bombing plenty of Middle Eastern countries—then he’s a “strong leader on security issues.” But when Obama starts to think that maybe reflexive military action hasn’t acquitted itself too well over the past few years—in that case he’s “kind of lost his way.”

That’s the default view of practically everyone in Washington: Using military force shows strong leadership. Declining to use military force shows weakness. But most folks inside the Beltway don’t even seem to realize they feel this way. It’s just part of the air they breathe: never really noticed, always taken for granted, and invariably the difficult but sadly necessary answer for whichever new and supposedly unique problem we’re addressing right now. This is what Obama is up against.