A couple of days ago Vox ran a story about a new Ipsos-MORI poll showing that Americans think the unemployment rate right now is an astonishing 32 percent—higher than during the Great Depression. The correct answer, of course, is about 6 percent. And this is not just a harmless bit of ignorance, like not being able to name the vice president. “It matters,” we’re told, “because the degree to which people perceive problems guides how they make political decisions.”

My first thought when I saw this is the same one I have a lot: how has this changed over time? After all, if Americans always think the unemployment rate is way higher than it is, then it doesn’t mean much. But I couldn’t find any previous polling data on this. I made a few desultory attempts in between football games this weekend, but came up empty.

Luckily, John Sides is a stronger man than me, and also more familiar with the past literature on this stuff. It turns out there’s not very much to look at, actually, but what there is suggests that this Ipsos-MORI poll is a weird outlier. Generally, speaking, most people do know roughly what the unemployment rate is:

In this 1986 article….two-thirds, stated that the unemployment rate was 10 percent, 11 percent, or 12 percent — a substantial degree of accuracy.

In this 2014 article….approximately 40-50 percent of respondents could estimate this rate within 1 percentage point.

In this 2014 article….most respondents gave fairly accurate estimates — which is reflected in the median.

So the whole thing is a little odd. In past polls, people weren’t too far off. In this one, they’re off by more than 25 points. Something doesn’t add up, but it’s not clear what. In any case, it’s worth taking this whole thing with a grain of salt.

But all is not lost. If you decide to take this poll seriously anyway, you might be interested to know that the unemployment results are merely one part of a broader report titled “Perils of Perception.” Basically, it’s an international survey showing just how wrong people in different countries are about things like murder rates, number of Muslims, teen birth rates, voting, and so forth. This is then compiled into a handy “Index of Ignorance.”

So who’s #1? Not us. We came in second to Italy. But that’s not too bad! We’re pretty damn ignorant, and with a little less effort we might take the top spot next year. Still, even though Germans and Swedes may feel smug about their knowledge of demographic facts, can they launch pointless wars in the Middle East whenever they feel like it? No they can’t. So there. 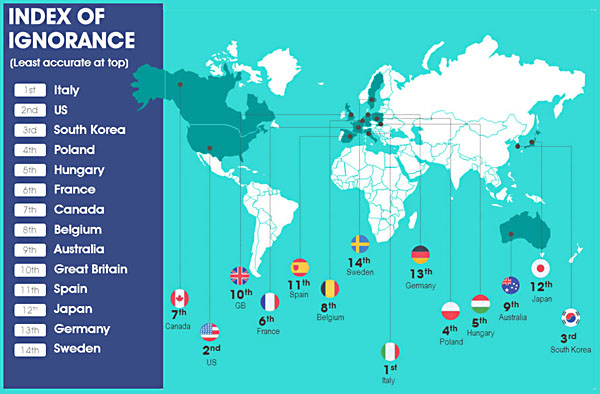 POSTSCRIPT: On a slightly more serious note, Sides tells us that not only is the Ipsos-MORI poll an odd outlier, but that his research suggests that ignorance of the unemployment rate has very little impact on people’s attitudes anyway. I’d say the Ipsos-MORI poll accidentally confirms this. The German public, for example, has a much more accurate view of the unemployment rate than the American public. So has that helped their policymaking? It has not. Over the past few years, Germany has probably had the worst economic policy of any developed country, while the US has had among the best. A well-informed public may be less important than we think.