All but drowned out by Republicans’ clamorous opposition to President Obama’s executive action on immigration are some leaders who worry that their party could alienate the fastest-growing group of voters, for 2016 and beyond, if its hottest heads become its face.

They cite the Republican Party’s official analysis of what went wrong in 2012…”If Hispanics think that we do not want them here,” the report said, “they will close their ears to our policies.”

…”Clearly with Republicans not having gotten to a consensus in terms of immigration, it makes it a lot more difficult to talk about immigration as a unified voice,” said David Winston, a Republican pollster who advises House leaders. “There are some people — because there’s not a consensus — that somehow end up having a little bit louder 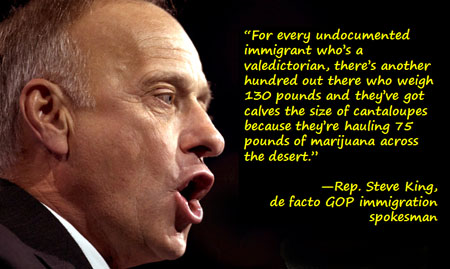 voice than perhaps they would normally have.”

Among them is Representative Steve King of Iowa…

Ah yes, Steve King of Iowa. The odds of shutting him up are about zero, and with primary season approaching he’s going to become the de facto leader of the anti-immigration forces. In the same way that Republican candidates all have to kiss Sheldon Adelson’s ring and swear eternal loyalty to Israel if they want access to his billions, they’re going to have to kiss King’s ring and swear eternal hostility to any kind of immigration from south of the border—and they’re going to compete wildly to express this in the most colorful ways possible. And that’s a big problem. Expressing loyalty to Israel doesn’t really have much downside, but effectively denouncing the entire Hispanic population of the United States is going to steadily destroy any hopes Republicans have of ever appealing to this fast-growing voting bloc.

And that’s not all. Republican leaders are not only fearful of next year’s primaries branding the GOP forever as a bunch of xenophobic maniacs, they’re afraid it’s going to wipe out any chance they have over the next two years of demonstrating to voters that they’re a party of adults. Here’s the LA Times:

The strong reaction by Republican leaders has less to do with opposition to the nuts and bolts of the president’s immigration policy and more to do with fear and anger that the issue will derail the agenda of the new Republican majority before the next Congress even convenes.

Republican leaders who had hoped to focus on corporate tax reform, fast-track trade pacts, repealing the president’s healthcare law and loosening environmental restrictions on coal are instead being dragged into an immigration skirmish that they’ve tried studiously to avoid for most of the last year.

…To many, stark warnings from Boehner and McConnell sound more like pleas to the president to avoid reenergizing the GOP’s conservative wing, whose leaders are already threatening to link the president’s immigration plan to upcoming budget talks.

For what it’s worth, I think Obama deserves credit for an unusually brilliant political move here. Some of this is accidental: he would have announced his immigration plan earlier in the year if he hadn’t gotten pushback from red-state Democratic senators who didn’t want to deal with this during tough election battles. Still, he stuck to his guns after the midterm losses, and the result seems to be almost an unalloyed positive for his party.

The downside, after all, is minimal: the public says it’s mildly unhappy with Obama using an executive order to change immigration rules. But that’s a nothingburger. Outside of the Fox News set that’s already convinced Obama is a tyrant bent on shredding the Constitution, this simply isn’t something that resonates very strongly or for very long. It will be forgotten in a few weeks.

The upside, conversely, is potentially huge. Obama has, indeed, waved a red flag in front of congressional tea partiers, turning them into frothing lunatics who want to shut down the government and maybe even impeach him. This has already turned into a huge headache for John Boehner and Mitch McConnell, who really don’t want this to be the public face of the party. In addition, it’s quite possibly wrecked the Republican agenda for the next year, which is obviously just fine with Obama. And it’s likely to turn next year’s primary season into an anti-Hispanic free-for-all that does permanent damage to the GOP brand.

And that’s not even counting the energizing effect this has on Democrats, as well as the benefit they get from keeping a promise to Hispanics and earning their loyalty for the next few election cycles.

Is there a price to be paid for this? If you think that maybe, just maybe, Republicans were willing to work with Obama to pass a few constructive items, then there’s a price. Those items might well be dead in the water. If you don’t believe that, the price is zero. I’m more or less in that camp. And you know what? Even the stuff that might have been passable—trade authority, the Keystone XL pipeline, a few tweaks to Obamacare—I’m either opposed to or only slightly in favor of in the first place. If they don’t happen, very few Democrats are going to shed any real tears.

That leaves only presidential appointments, and there might be a downside there if you think that initially Republicans were prepared to be halfway reasonable about confirming Obama’s judges and agency heads. I kinda doubt that, but I guess you never know. This might be a genuine downside to unleashing the tea party beast.

So: the whole thing is politically pretty brilliant. It unifies Democrats; wrecks the Republican agenda in Congress; cements the loyalty of Hispanics; and presents the American public with a year of Republican candidates spitting xenophobic fury during primary season. If you’re President Obama, what’s not to like?