Over the past two or three days, a surprising number of people have asked me why the Democrats appear to be doomed in today’s midterm election. I don’t know for sure whether Democrats are doomed, but there’s no denying 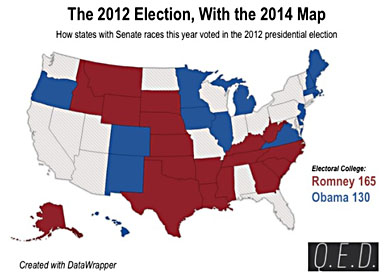 that things look grim for the donkeys. For the record, then, if Republicans retake the Senate tonight, here are the three big reasons why:

The Map. Democrats are defending a lot of seats that they won in red states in 2008. They were always likely to lose most of them when they came up for reelection, and that’s exactly what’s happening. By contrast, Republicans had almost no vulnerable seats to defend. The map on the right shows the basic shape of the river.

6-Year Itch. It’s the sixth year of a presidential term. Barack Obama has mostly managed to avoid the scandals that so often beset presidents in their sixth year, but he’s still suffering from the usual accretion of bad news and exhaustion that’s almost inevitable at this point. This has tanked his approval rating and tarnished the Democratic brand.

Midterm Falloff. Democratic voting blocs (minorities, the poor, and the young) simply tend not to vote in midterms.

This explains most of what’s going on. Beyond this, every race has its own local issues, and nationally we’re still suffering from government gridlock; a weak economy; and lots of scary overseas stuff (Ebola, ISIS, Putin, etc.).

For what it’s worth—and I reserve the right to change my mind about this later—one thing I don’t blame is stupid Democratic strategery. Sure, I’d like to have seen a clearer message from Democrats and a more full-throated defense of liberal priorities. But honestly, I don’t see any magic bullets out there. Like it or not, there were a lot of Democrats defending their seats in red states where that message just flatly wasn’t a winner, and these folks really had no choice but to distance themselves from Obama. This created obvious problems of its own since (a) it made Dems look a bit aimless and (b) it provided the press with a storyline too juicy to pass up, but I’m hard pressed to figure out a better alternative. Democrats may not have mounted a memorably disciplined or inspiring campaign this year, but neither did they mount a memorably disastrous campaign. For the most part, they muddled along about as well as they could have, and in the end, it probably wasn’t enough. That’s not very dramatic, but it’s probably the truth.