Luke O’Neil regales us this weekend with a roundup of media coverage of Black Friday:

Consider the jocular hosts’ grinning affect as they relate news of brawls throughout the country in this clip from Fox & Friends First today, for example, or how numerous Web sites will round up the best brawl videos. As Yahoo News writes on the spread of Black Friday violence to 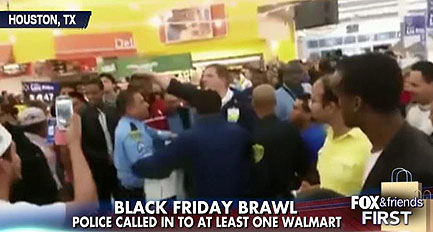 Britain this year, “That means even more grown adults fighting over discounted underwear, and more opportunities to for us to gawk at them.” Or take this video of a fight inside of a Houston Wal-Mart. You’ll notice producers from a variety of television programs — “Good Morning America,” Fox News, CNN — all asking for permission to use the video on their broadcasts, because they know this type of shopper-on-shopper violence is a huge draw.

So what does it all mean? O’Neil points out that coverage of Black Friday brawls is a big ratings draw, which makes it the perfect place for yet more commercials to promote Black Friday sales:

It’s hard to avoid the message of those ads. We’ve been bombarded with them for weeks now, from corporations eager to entice shoppers with so-called “door-buster” deals. And then, once the shopping public falls for them, a privileged segment of the population sits back and dehumanizes them for its collective amusement. Look at these hilarious poor people, struggling to take advantage of a deal on something they might not otherwise be able to afford on items that we take for granted, we joke on Twitter. The message is the same: this is shameful, materialistic behavior. And by pointing it out, we differentiate ourselves, reaffirm our class status as being above the fray of the lowly and desperate.

If you read this wrong, it can seem like just a bit of tiresome PC tsk-tsking. Do we have to feel guilty about everything these days?

But O’Neil has a point, and it’s one that irks me as well. It’s similar to my irkitude over loyalty cards. Some of this, I’ll admit, is just my own personal brand of curmudgeonliness, but mainly it’s because the discounts they provide have become so damn big in recent years. For me, loyalty cards are optional if I feel like being cranky about it, but most people no longer have that luxury. If you’re living on a working-class income, you flatly can’t afford to give up a 10 or 15 percent discount on your food every week. You have to fork over your loyalty card number, and that means everything you buy is sliced, diced, tracked, and sold to every marketer in the world. Don’t like it? If you’re poor, that’s tough. Your privacy is no longer even an option.

In a sense, of course, these are both just routine examples of how the lives of the poor are harder than the lives of the non-poor—and there’s hardly anything insightful in pointing out that the poor lead hard lives. Still, there are limits. Do we really have to mock them for the mere fact of having incomes low enough that Black Friday sales are meaningful to them? Do we really have to create a marketplace in which merely having a low income forces you to make the most intimate details of your life available to anyone willing to pay a few dollars for it?

These are hardly the biggest problems of the poor. I don’t even know if they’d make the top 100. But they’re both examples of the way in which being poor doesn’t just mean you can’t afford as much nice stuff as richer folks. They’re examples of ways that we rob the poor of dignity for no real reason other than being poor. So even if they aren’t the biggest problems in the world, they’re worth thinking about occasionally.