One of the biggest problems with modern medical research is the way that clinical studies are publicly reported by pharmaceutical companies. Basically, if a study shows a positive result, they publish it. If it shows a null or negative result, they often just file it away and no one ever hears about it.

Here’s what this means. If, say, a pharmaceutical company publishes two clinical studies showing that its new drug works better than any previous drug, no one has any idea what this means. Did they do two studies, and they were both positive? Or did they do ten studies, and two were positive compared to eight that were negative? If it’s the latter, then the new drug is probably not so great. But you have no way to know. No one knows.

This is not merely a bug in the system. It’s pretty much flat out corruption and scientific malpractice. Nor is it purely an academic concern. A few years ago, Irving Kirsch of Hull University used the Freedom of Information Act to demand full trial data about antidepressants from the FDA. This gave him access to all the relevant clinical studies, not just the ones that pharmaceutical companies had chosen to make public. And when his team examined them all, it turned out that the average effectiveness of several popular antidepressants was close to zero. For patients with moderate depression, the drugs were essentially no better than a placebo. 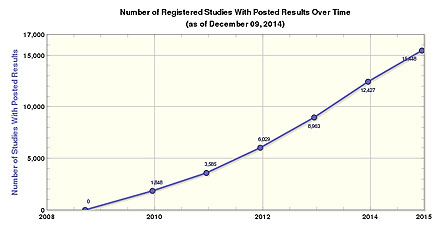 For over a decade, Dr. Zarin, a Harvard-trained MD, […] has earned a reputation as a crusader for open data, quietly presiding over the world’s largest database of clinical trials, ClinicalTrials.gov. Established in 2000, and operated by the NIH, it now holds information from more than 180,000 studies in humans in over 180 countries.

The idea underlying ClinicalTrials.gov’s creation was a public record about which trials are going on as soon as they are started. That should, in theory, make it more difficult for researchers to hide trials that didn’t produce the results they wanted. The database also makes it easier for patients to know about studies being done, should they require access to an experimental drug, for example.

But there was still a problem: ClinicalTrials.gov, up until now, hasn’t required researchers to report the outcomes of their trials — only the fact they’re happening. Under a new plan, proposed by Health and Human Services last month, researchers who run clinical trials would be made to not only register them on the database within three weeks of signing up the first study participant, but also report a summary of results — no matter the outcome. This will vastly expand the trove of data on the site.

It turns out there are some exceptions in the new rules, so there are still some studies that won’t be reported. But this is nonetheless a huge step forward and should go a long way toward improving the quality of pharmaceutical research. It’s the kind of regulatory change that doesn’t get as much attention as it deserves, and for fans of functional government, it’s also an example of the kind of bipartisan cooperation that’s become rarer and rarer these days. The new rules were authorized by the Food and Drug Administration Amendments Act of 2007, which was passed nearly unanimously in both the House and Senate and signed into law by George Bush. It was then implemented by the Obama administration.

And it’s good news for all of us. Don’t you wish we could do more stuff like this?