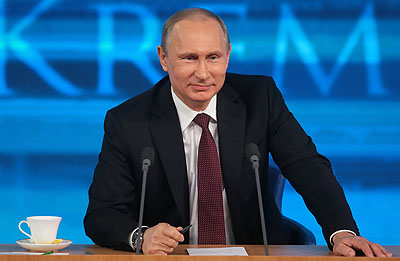 In his yearly press conference, Vladimir Putin appeared to be trying to cool down the rhetoric over Ukraine:

Mr. Putin recognized the efforts of President Petro O. Poroshenko of Ukraine in ending the conflict in the southeast of that country, but he suggested that others in Kiev, the Ukrainian capital, may be trying to prolong the conflict….“We hear a lot of militant statements; I believe President Poroshenko is seeking a settlement, but there is a need for practical action,” Mr. Putin added. “There is a need to observe the Minsk agreements” calling for a cease-fire and a withdrawal of forces.

Russia has toned down its talk on the Ukraine crisis in the past month, and some of its most incendiary language, like “junta” and “Novorossiya,” a blanket term used for the separatist territories, is no longer used on state-run television news. Mr. Putin also notably omitted those terms, which he had used in other public appearances, on Thursday.

So does this mean Putin is adopting a more conciliatory attitude toward the West? You be the judge:

In general, he blamed “external factors, first and foremost” for creating Russia’s situation — accusing the West of intentionally trying to weaken Russia. “No matter what we do they are always against us,” Putin said, one of a series of observations directed at how he said the West has been treating Russia.

Putin attributed Western sanctions that have targeted Russia’s defense, oil and gas and banking sectors for about “25 percent” of Russia’s current difficulties.

But Putin stood firm over the actions that brought on the Western backlash, including Russia’s annexation of the Crimea peninsula after pro-Moscow rebels in eastern Ukraine began an uprising earlier this year….“Taking Texas from Mexico is fair, but whatever we are doing is not fair?” he said, in comments seemingly directed at the United States.

Putin also suggested that the West was demanding too many concessions from Russia, including further nuclear disarmament. Likening Russia to a bear — a longtime symbol of the country — he chided the West for insisting the Russian bear “just eat honey instead of hunting animals.”

For what it’s worth, I’d say Putin is probably right about sanctions being responsible for around 25 percent of Russia’s economic problems. As for his guess that those problems will last two years before Russia returns to growth? That might not be far off either, though I suspect growth will be pretty slow for longer than that.

It’s hard to render a real judgment about Putin’s intentions without being fluent in Russian and watching the press conference in real time, but based on press reports I’d say Putin’s anti-Western comments were milder than they could have been. My guess is that events in Ukraine really haven’t worked out the way he hoped, and he’d be willing to go ahead and disengage if he could do so without admitting that he’s conceding anything. The anti-Western bluster is just part of that. (Though it’s also partly genuine: Putin really does believe, with some justification, that the West wants to hem in Russia.)

Oddly, then, I’d take all this as a mildly positive sign. The rhetoric seemed fairly pro forma; Putin obviously knows that sanctions are hurting him; and there were no serious provocations over Ukraine. I’ll bet there’s a deal to be made with Putin as long as it’s done quietly.