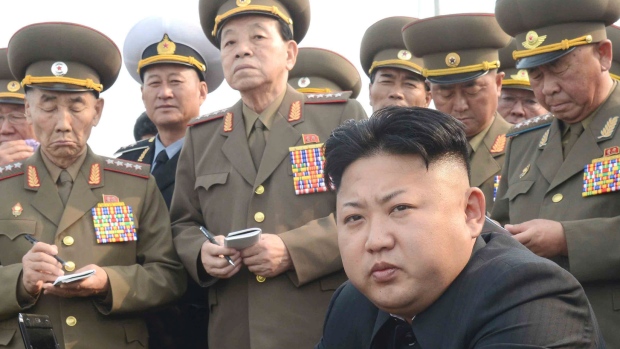 Over at the all-new New Republic, Yishai Schwartz sounds the usual old-school New Republic war drums toward North Korea. “The only way to prevent future attacks,” he says, “is for foreign governments to know that attacks against U.S. targets—cyber or kinetic—will bring fierce, yet proportionally appropriate, responses.” And time is already running out. We should be doing this now now now.

Right. So what’s the deal, Obama? Why all the dithering in the face of this attack? Are you just—oh wait. Maybe there’s more to this. Here’s the Wall Street Journal:

Responding presents its own set of challenges, with options that people familiar with the discussions say are either implausible or ineffective. North Korea’s only connections to the Internet run through China, and some former officials say the U.S. should urge Beijing to get its neighbor to cut it out…But the U.S. already is in a standoff with China over accusations of bilateral hacking, making any aid in this crisis unlikely, the intelligence official said.

Engaging in a counter-hack could also backfire, U.S. cyberpolicy experts said, in part because the U.S. is able to spy on North Korea by maintaining a foothold on some of its computer systems. A retaliatory cyberstrike could wind up damaging Washington’s ability to spy on Pyongyang, a former intelligence official said. Another former U.S. official said policy makers remain squeamish about deploying cyberweapons against foreign targets.

…North Korea is already an isolated nation, so there isn’t much more economic pressure the U.S. can bring to bear on them either, these people said. Even publicly naming them as the suspected culprit presents diplomatic challenges, potentially causing problems for Japan, where Sony is based.

I’d like to do something to stomp on North Korea too. Hell, 20 million North Koreans would be better off if we just invaded the damn place and put them all under NATO military rule. It’s one of the few places on Earth you can say that about. However, I’m sensible enough to realize that things aren’t that easy, and there’s not much point in demanding “action” just because the situation is so hellish and frustrating.

Ditto in this case. A US response would certainly be appropriate. And honestly, it’s not as if there’s really anyone taking the other side of that argument. But given the nature of the DPRK, a meaningful response would also be really hard. America just doesn’t have a whole lot of leverage against a place like that. What’s more, if we do respond, it’s at least even odds that it will be done in some way that will never be made public.

So let’s cool our jets. Armchair posturing might make us feel better, but this isn’t a partisan chew toy, and it’s not a matter of the current administration being insufficiently hawkish. It’s a matter of figuring out if there’s even a way to respond effectively. Like it or not, it might turn out that there isn’t.