The Fed has kept interest rates near zero for more than six years. With the economy finally showing signs of recovery, is it now time to think about raising rates a bit?

Normally, the answer might be yes: unemployment has trended down to below 6 percent, and orthodox theory suggests that at this level we’ll start to see inflationary pressure that the Fed needs to respond to. However, as Paul Krugman points out, orthodox theory isn’t telling the right story right now. Core inflation has been going down, not up, for the past two years, and it clocked in at about 1.4 percent in the most recent quarter. This is well below the Fed’s target of 2 percent. So what’s going on?

Recent data are perfectly consistent with the view that full employment requires an unemployment rate below 5 percent; the most recent data would suggest an even lower rate. This might or might not be right; I don’t know. But the Fed doesn’t know either.

And in the face of that uncertainty, the crucial question is what happens if you’re wrong. And the risks still seem hugely asymmetric. Raise rates “too late”, and inflation briefly overshoots the target. How bad is that?….Raise rates too soon, on the other hand, and you risk falling into a deflationary trap that could take years, even decades, to exit.

I really, really hope this is getting through.

The key issue here is probably an overreliance on the headline unemployment rate. It’s now registering 5.6 percent, and under normal circumstances that would be about as low as you could expect it to go. But these aren’t normal circumstances, and there’s every reason to think that the headline rate isn’t telling the whole story. If you look at broader measures, like the one on the right, you can see that we’re still well 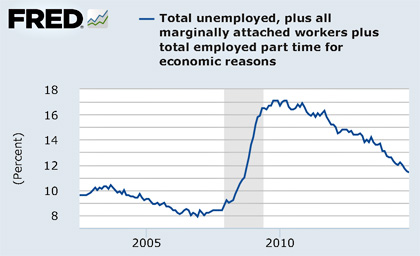 above the level of 2006-07. There are still a whole lot of people who have simply given up looking for work and aren’t being counted by the “official” numbers.

The picture is similar if you look at the employment-population ratio, which measures the total percentage of the population that’s currently employed. It plummeted by nearly five percentage points during the great crash, and it’s recovered less than a point of that loss over the past couple of years. There are several reasons for this, and some of this loss is permanent—the result of baby boomers retiring, for example. Still, this number probably needs to increase another couple of points before we can say we’ve truly reached full employment.

Finally, you can see the same story if you look at wages. If the economy were at full employment, we’d see not just inflation, but an increase in wages. So far we haven’t. This is an almost certain sign that there are still plenty of people out of work who don’t want to be.

Janet Yellen and the rest of the Fed are well aware of all this. It’s hardly a secret. And as Krugman says, the risks here are all on one side. If it turns out that we really are at full employment and the Fed does nothing, all that happens is that we’ll overshoot our inflation target for a short while. There’s no harm in that, especially since we’ve been undershooting it for the past couple of years. But if we tighten too quickly? We risk an economic slowdown at a time when the global economy is still fragile.

This is no time to be taking chances. China is slowing down, Europe is back in recession and facing a possible Greek crisis, and emerging economies are looking distinctly dicey right now. The American economy might be the only engine keeping it all afloat. It’s a lousy time to risk an economic downturn based on nothing more than a phantom fear of inflation.