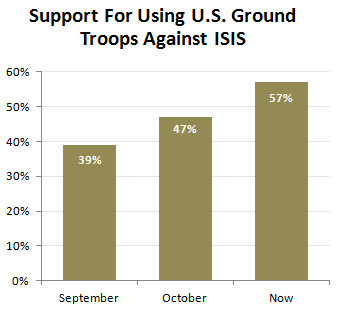 It sure isn’t hard to gin Americans into a war fever. President Obama isn’t even trying, but support for sending U.S. ground troops back into Iraq to fight ISIS continues to grow. According to a new CBS News poll, it now stands at 57 percent.

It’s not just conservatives, either. Democrats favor sending in ground troops by a margin of 50-43 percent. We’re only a few public beheadings away from two-thirds approval margins among all groups, which is something of a magic number. If we reach that point, President Obama and congressional Democrats might decide—reluctantly or otherwise—that they have to change course and send in a substantial ground force.

This would probably be a disaster. The most optimistic scenario is that Graeme Wood is right, and the ISIS folks are such nutters that they’d welcome a final, conventional showdown against the forces of the West:

The Islamic State has attached great importance to the Syrian city of Dabiq, near Aleppo….It is here, the Prophet reportedly said, that the armies of Rome will set up their camp. The armies of Islam will meet them, and Dabiq will be Rome’s Waterloo or its Antietam.

….Now that it has taken Dabiq, the Islamic State awaits the arrival of an enemy army there, whose defeat will initiate the countdown to the apocalypse….If the United States were to invade, the Islamic State’s obsession with battle at Dabiq suggests that it might send vast resources there, as if in a conventional battle. If the state musters at Dabiq in full force, only to be routed, it might never recover.

That’s a battle we could pretty easily win. But if it turns out the leadership of ISIS isn’t quite as daft and millenarian as Wood says, then the only way to defeat ISIS would be in grisly house-to-house fighting in Sunni strongholds like Mosul. We already know that U.S. troops can’t do that effectively, and neither can the predominantly Shia troops controlled by Iraq. It would be a long, grinding, disaster of a war.

But apparently the American public hasn’t quite internalized that yet. They’re becoming more and more enraged about ISIS, and they want to do something. That’s a bad combination.